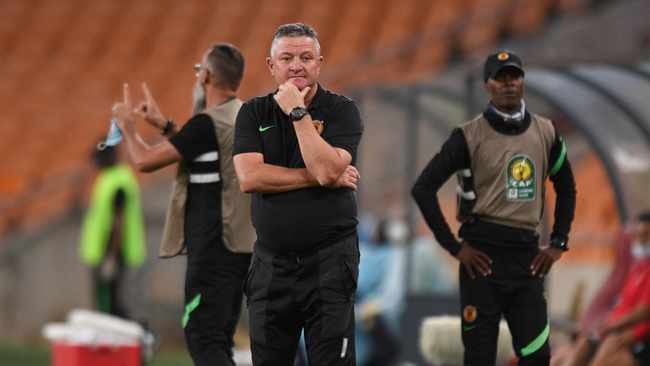 Kaizer Chiefs may have rewritten the history books and booked their spot in the CAF Champions League quarter-finals for the first time after 51 years, but coach Gavin Hunt is not getting carried away, saying they haven’t won anything yet.

Despite turmoil in their domestic campaign, Chiefs made history late last year by qualifying for the group stage of the pan-African competition for the first time. They were drawn in Group C, alongside Wydad Casablanca, Horoya Athletic Club and Petro de Luanda.

Wydad Casablanca and Horoya were favourites to qualify for the knockout stage, given that they are regulars in the competition. Chiefs, though, pulled a rabbit out of the hat and finished as runners-up with nine points, four behind winners Wydad.

Chiefs’ advancement came due to the head-to-head ruling after they scored two goals away at the General Lansana Conte Stadium in Conakry against Horoya on Saturday night, while the Guineans, who finished third, had managed a goalless draw in Johannesburg.

But despite the achievement, which has seen Chiefs join Mamelodi Sundowns as the two teams from the PSL to reach this stage of the competition this season, Hunt believes that there’s still a long way to go, especially with the quarter-final draw only set for later this month.

“We knew in order to qualify we had to get a score draw or win the game. But it was a huge fight and effort. Great achievement for the club. For the first time, they got into and out of the group as well. It’s going to be a tough battle, looking at who we are going to draw now,” Hunt said.

“But we’ll worry about that when we get to that. We have won nothing; we’ve just got through. This is one hell of a competition. We haven’t signed players, nothing. You’ve got to look at it from that perspective. For the squad that we’ve got to reach this front, is an over-achievement.”

Hunt hasn’t had the opportunity to bolster his squad this season, given that he inherited the team after Fifa banned the club from making any signings until the next upcoming transfer window following irregularities during the signing of Malagasy Arohasina Andrianarimanana.

Hunt, though, is aware of the demands that comes with his job – to deliver silverware. And he vows that as soon as he gets his preferred players ahead of next season, he’ll deliver on the club’s mandate and deliver trophies.

“The club has brought me here to win trophies, and they’ll win trophies,” Hunt said. “What we need to really do is to look at our squad going forward. And get the desire and attitude back. They were so close to that last season. We need to be challenging for trophies across all fronts.”

Chiefs hopes of winning silverware this season solely lies on the continental showpiece, given that their domestic form has been filled with turmoil. They missed out on the MTN8 competition and Nedbank Cup, while they trail league leaders Sundowns with 19 points.

“We need 17 points in the league to get ourselves in the top eight – and that’s a minimum. From 10 games, it sounds doable. But the PSL is totally different to the Champions League which is much slower, physical and direct compared to the PSL which is about movement,” Hunt said.