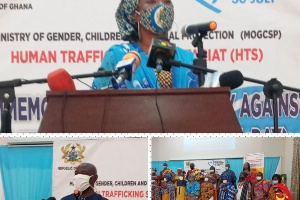 The Ministry of Gender campaigns against human trafficking in the country

The Ministry of Gender, Children and Social Protection(MOGCSP) has called on traditional authorities to join the fight against human trafficking in the country.

The call was made by the Chief Director of the MOGCSP, Dr Afisah Zakariah at the observation of the world day against trafficking in persons(Blue Day) at Koforidua in the Eastern Region.

She said poverty was no excuse to look on for any form of human trafficking to thrive in the communities.

The Eastern Regional Minister, Mr Eric Kwakye Darfour, said human trafficking occurred in different forms in the communities and appealed to traditional authorities to join the fight against the menace.

Mr Darfour urged the traditional authorities to help educate young people against rushing out to chase false employment opportunities outside the country which end up in they being sold into slavery.

Ms Abena Anobea Asare, the Head of the Human Trafficking Department of MOGCSP, appealed to traditional authorities to expose people who engaged in human trafficking in their communities and help protect victims of human trafficking.

He called on parents to pay attention to what their children watch on their phones during this coronavirus era.

Nana Ayimedu appealed to traditional authorities to provide land to the youth to go into commercial farming to encourage them to stay in the country.

Awo Yaa Otwiwaa, Ohemaa of Agyemanti in the Eastern Region, called on parents to provide the basic needs of their daughters to help reduce the temptations that make young ladies to depend on men, which lead to teenage pregnancies and other temptations that lead them into human trafficking.

GhanaWeb is not responsible for the reportage or opinions of contributors published on the website. Read our disclaimer.

Send your news stories to

How Oware was used by slaves in the Caribbean to plan their escape from...

BBNaija: Lucy And Wathoni Gossip About Erica As She Ignores Them

Wendy Shay denies having any love relationship with Shatta Wale

Afia Schwarzenegger Drops Juicy Details About The House PAPA NO Rented For His Slay...