T.B Joshua donates N5m to man whose wife was killed by police 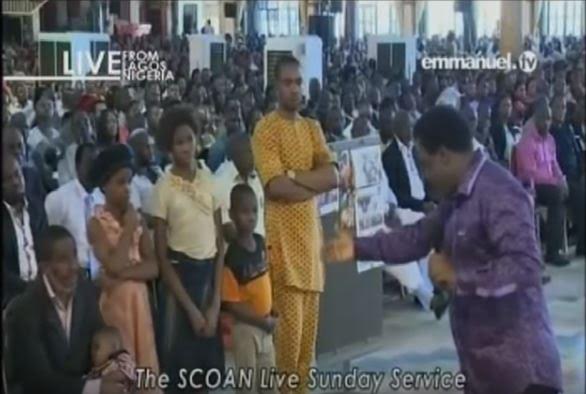 The Founder of The Synagogue, Church of All Nations (SCOAN), Prophet TB Joshua, has donated the sum of N5million to Mr. Sunday Udoh, whose wife was shot dead by police in Lagos State last year, according to a post on the church’s Facebook page.

Prophet T.B. Joshua counselled Mr. Udoh that he should be consoled in knowing his wife died after returning from church.

He further encouraged him to continue worshipping in his church, adding that one should stay where God has placed him.

“One moment was all it took. One bloody, harrowing moment and the world of Mr Sunday Udoh literally came falling apart. The body of his beloved wife lay strewn on the floor as blood flowed from the gaping wound on his jaw.

Two brutal gunshots and then deafening silence…
Mr Udoh, his wife and children were returning home from a prayer meeting in their church when tragedy struck in the cruellest, most heinous of ways. Halted by members of the police, who were clearly intoxicated by alcohol, the sum of N2, 000 was rudely demanded from Sunday. Insisting he had no cash with him, he was grudgingly waved on to proceed.

However, moments after sitting down in his vehicle, two gun shots rang out. One struck his shoulder and then pierced his lower jaw. The other killed his wife instantly.

The baby she carried fell alongside her lifeless body, three young children witnessing the ruthless killing of their dear mother in cold blood. No tears could replace what had been so callously taken away. Confronting the policemen responsible, Sunday received nothing more than threatening words before they took to their heels.

Nearly six months down the line, the body of Mrs Udoh’s wife was still lying in the mortuary. Their children, traumatised by the horrific incident, had left school – the eldest daughter developing epileptic fits in the wake of the senseless killing.

Although the policemen responsible had been dismissed from their workplace and human rights groups had protested and called for justice, the family were still suffering. Sunday was incapacitated, unable to work as he struggled to overcome his injuries.

Two major operations later and the wound on his jaw still leaked pus and his shoulder remained numb. Although not a member of The SCOAN, Sunday was advised that if he could come to the Arena of Liberty, God would use Prophet T.B. Joshua to assist him both physically and spiritually.

After sharing his ordeal, Emmanuel TV viewers and partners around the world wrote in, promising to support the family to start life afresh.

Prophet T.B. Joshua announced he would give the family N5 million, counselling Mr Sunday that he should be consoled in knowing his wife died after returning from church, stressing that the manner in which death comes should not be focused on.

He further encouraged him to continue worshipping in his church, adding that one should stay where God has placed him. “You are because I am; I am because you are.”