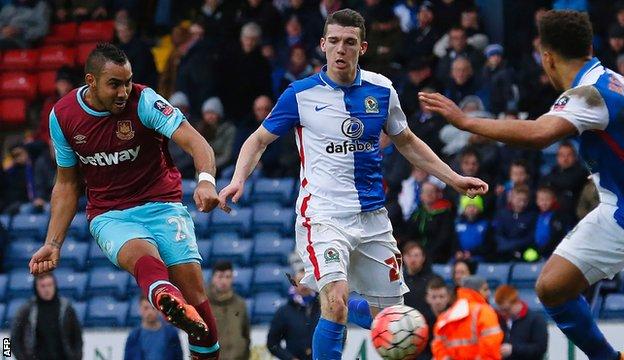 Dimitri Payet produced a virtuoso performance as West Ham fought back to ease into the FA Cup quarter-finals at Championship side Blackburn.

The home team took the lead when right-back Ben Marshall tucked in a low shot.

Victor Moses’s equaliser squirmed in and Payet’s free-kick put West Ham ahead before Blackburn were reduced to 10 men by Chris Taylor’s red card.

The Hammers, who last won the FA Cup in 1980, will travel to either Shrewsbury or Manchester United in the last eight.

It is only the second time in the past 10 seasons that they have reached the quarter-finals.

Can the Hammers end their trophy drought?

West Ham have not won a major trophy for 36 years but, in their final season at the Boleyn Ground, are hoping that they can take the FA Cup with them to the Olympic Stadium.

Hammers manager Slaven Bilic has previously said he would rather win the trophy than finish in the Premier League top four, and he showed his intent by picking a near full-strength side against the Championship strugglers.

And, despite that brief early scare after Marshall’s opener, the visitors never looked like becoming the victim of a cup upset.

Backed by over 7,000 travelling supporters, they quickly grew into the game as their superior quality shone through.

The Hammers, who had won just one of their previous 10 away matches, completely controlled the tie after Taylor’s dismissal, with Blackburn constantly stretched by their pace and sharp movement.

“The sending-off was completely needless and changed the course of the game,” said BBC Radio 5 live summariser Mark Lawrenson.

France attacking midfielder Payet has been the star of West Ham’s season, impressing plenty of observers since his summer move from Marseille with his vision, poise and technical ability.

The 28-year-old showed again why he is pivotal to the Hammers’ hopes of winning the FA Cup with a masterful performance at Ewood Park.

He put the visitors ahead with a trademark free-kick, arcing the ball over the Rovers wall from almost 30 yards and into the corner.

Not for the first time this season, Payet was not always constantly involved in the game – but it is his ability to burst into life with devastating effect which is so impressive.

In the final stages, his precise throughball teed up Emenike’s second goal before sealing the match with a wonderful solo run and finish.

Payet has now been involved in 17 goals in all competitions for the Hammers since his arrival, scoring nine goals and providing eight assists.

No wonder Hammers boss Bilic, who was warmly embraced by Payet on the touchline after his first goal, was so pleased to tie him down to an improved contract.

“Dimitri is one of the very best, in terms of the players that I’ve played with and coached. He is up there with Luka Modric,” said Bilic afterwards.

Back to Championship survival for Blackburn

Blackburn, who are sixth bottom in the Championship, are understandably prioritising safety over a run into the latter stages of the FA Cup, with Lambert insisting he did not want a replay because of the knock-on effect on his side’s schedule.

And he was granted his wish by some dismal defending.

Despite their lowly league position, Rovers have only conceded 27 goals in 30 matches but were the architects of their downfall against the Hammers.

The home defence retreated as Moses ran forward to score the equaliser, with not one Blackburn player attempting to stop the on-loan Chelsea winger.

Steele did not cover himself in glory either, looking understandably upset with himself for not making a seemingly simple save.

Rovers started both halves impressively, playing at a high tempo and trying to push back their Premier League opponents.

But once Taylor received his second yellow card – the first for tripping Payet, who then scored from the free-kick, and another for needlessly clipping Moses – they were totally outclassed as the Hammers ran riot.
–
By: BBC