Harper Lee: US author of To Kill a Mockingbird dies aged 89

Harper Lee, the author of To Kill a Mockingbird, has died at the age of 89. The news was first confirmed by the mayor’s office in her hometown of Monroeville, Alabama.

In 1960, she published Mockingbird, a huge critical and commercial success which won the Pulitzer Prize for fiction and told the tale of a white lawyer defending a black man accused of rape in America’s deep South.

Lee was born 1926 in Monroeville, Alabama. She was the youngest of four children of lawyer Amasa Coleman Lee and Frances Cunningham Finch Lee.

She was a guardedly private person, respected and protected by residents of her town, rarely giving interviews.

Lee’s literary agent Andrew Nurnberg said: “Knowing Nelle these past few years has been not just an utter delight but an extraordinary privilege.

“When I saw her just six weeks ago, she was full of life, her mind and mischievous wit as sharp as ever. She was quoting Thomas More and setting me straight on Tudor history. We have lost a great writer, a great friend and a beacon of integrity.”

Spencer Madrie, owner of Ol’ Curiosities and Book Shoppe, a small, independent book store in Lee’s hometown that focuses largely on Lee’s works, said: “The world has lost a brilliant mind and a great writer.”

“We will remember Harper Lee for her candour, her talent, and the truths she gave the world, perhaps before the world was ready. We are grateful to have had a connection to an author who offered so much.

“There will always be something missing from Monroeville and the world at large in the absence of Harper Lee.”

To Kill A Mockingbird is told through the eyes and in the words of Scout, the child of Atticus Finch, and therefore it’s a book that’s very accessible to kids, and that’s why school children have been reading it all these years.

I think she stands, particularly among American readers, as someone who shone a light into a very dark place. She was writing at a time when people were beginning to lift the lid on everything that had been going on in the South which they’d chosen not to understand. That all changed in the 1960s. So I think her status for writing that book in its extraordinarily direct way will remain.

There’s no question that Go Set A Watchman didn’t read terribly well, Atticus Finch comes out as a rather less likeable figure than he is in To Kill A Mockingbird. But she remains an extraordinary figure.

She wrote one extremely powerful, accessible and successful book, that will be revered by people for a very long time.

Michael Morrison, the head of HarperCollins US said in a statement: “The world knows Harper Lee was a brilliant writer, but what many don’t know is that she was an extraordinary woman of great joyfulness, humility and kindness.

“She lived her life the way she wanted to – in private – surrounded by books and the people who loved her. I will always cherish the time I spent with her.”

Tom Weldon, CEO of Penguin Random House – which published Lee’s novels in the UK – said: “We are honoured to have been Harper Lee’s publisher and so saddened to hear of her passing. She was an extraordinary writer and readers around the world will always be thankful for her legacy.”

Erica Wagner, former literary editor of The Times said: “Harper Lee changed how much of America – and the world – saw the South.

“Few writers are privileged to create characters which truly seem to leap off the page and live: Lee will always be remembered as one of those.”

Apple CEO Tim Cook tweeted: “Rest in peace, Harper Lee. The one thing that doesn’t abide by majority rule is a person’s conscience.”

The manuscript for the sequel to To Kill a Mockingbird, Go Set A Watchman was discovered and published in 2015.

Many bookshops remained open all night to cope with demand on the day of the novel’s release last July.

The book is set 20 years after the events of To Kill a Mockingbird – although Lee actually wrote Go Set a Watchman first.

Watchman contains some of the same characters as Mockingbird, including Scout and her father Atticus Finch.

The publication proved controversial as early reviewers noted that Atticus expresses racist views in the story. 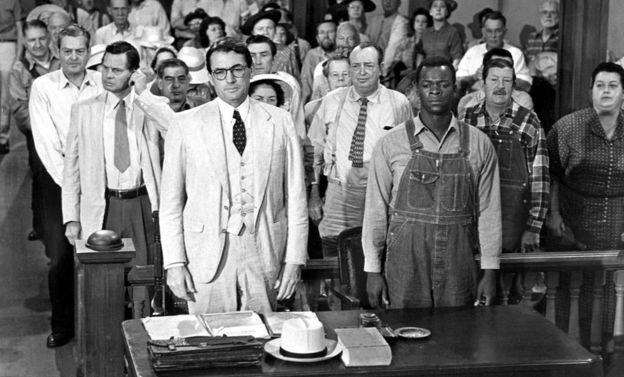 To Kill A Mockingbird was made into a film starring Gregory Peck as Atticus Finch.

To Kill a Mockingbird – at a glance

In the small fictional town of Maycomb in the depression-ravaged American South, a black man named Tom Robinson is falsely accused of raping a white woman.

A lawyer named Atticus Finch defends Robinson in court. The frenzy stirred up by the case and her father’s quest for justice are seen through the eyes of Finch’s six-year-old daughter Scout.

The book explores issues of race, class and the loss of innocence.

“You never really understand a person until you consider things from his point of view… until you climb into his skin and walk around in it.” – Atticus Finch to Scout.

“It was times like these when I thought my father, who hated guns and had never been to any wars, was the bravest man who ever lived.” – Scout Finch.

In 1962, it was made into a film starring Gregory Peck as Atticus Finch and Mary Badham as Scout.