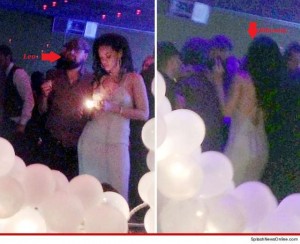 When it comes to relationships and intimacy, Rihanna is probably the most complex person.

According to a new report by TMZ, Leonardo DiCaprio and Rihanna bumped into eachother at L’Arc Nightclub in Paris early Sunday morning.

Pictures that emerged from their meeting makes it look like the duo got their tongues locked together.

Other observers say I was just that the photo was taken from a bad angle.

Sources say the ‘Diamond’ singer was hanging with model pal, Cara Delevingne, and when they saw Leo there was a friendly greeting … including a kiss on the cheek which was captured by a photo.

(You haven’t seen the pics because the agency hawking them claims Leo’s people are trying to block the sale … based on French privacy laws that protect public figures.)

The pair reportedly hooked up a year ago and have remained ‘just friends’ ever since.

In a recent interview with Vanity Fair, Rihanna confessed she hasn’t had a serious relationship since Chris Brown, whom she split with in 2012.