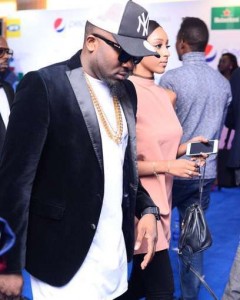 Yesterday evening, Chocolate City rapper, Ice Prince was trending on social media after news that his former lover, French-Ghanaian Model was cheating on him with an Abuja big boy hit the net.

The Abuja big boy shared evidential photos of himself and Maima on Instagram all cozy during their vacation in Paris and London and then deleted them just to make a point that the rumors were true.

Now Ice Prince is pouring his heart out on Twitter, saying he always falls for ‘bad bitches’ and talking about an ex-girlfriend who made him rethink about love.

Prodigy, a music producer friend of the rapper advised the rapper to calm down, assuring him that he would rise above it.

On numerous occasions he flaunted her on social media.

She also played his love interest in his latest video ‘Feelings’.