Oritsefemi Shows Off The Hoverboard He Got As Birthday Present [Photos] 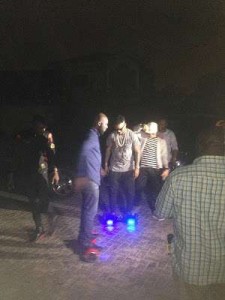 The 31 year old singer threw a party last night in Lekki which was attended by friends and celebrities such as, Reekado Banks, Ubi Franklin and rapper T.R.

At the birthday party Oritsefemi was given a hover boards as his birthday present.

The ‘Double Wahala’ took it for a spin during the party.

Oritsefemi is set to perform in the United Kingdom this year.

“A big shoutout to all my UK friends n fans the amazing musical Taliban is coming soon roger dat…. bigger than before…. massive concert…2016.”

His first live performance this year was at the One Lagos Festival in the early hours of January 1, 2016.

In October 2015, the Money Stop Nonsense (MSN) CEO toured China and performed in Beijing, Guangzhou, and Shenyang. While he was in the communist country, he shot his ‘Give Thanks’ video there.