BEWARE! 10 Signs Your Guy Is An Emotionally Abusive A$$hole 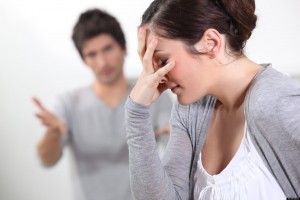 Here are the tell tale signs that he is an emotionally abusive man:

He shows a lack of respect. Not all emotionally abusive men will show you a lack of respect from Day 1. Some will turn on the charm for a while — others won’t. But how do they behave toward other people and speak about them? If your boyfriend is critical or contemptuous of other people, be very aware that you have a short shelf life before you become those other people.
He always tells incredible hard luck stories about his past. Every emotionally abusive boyfriend worth his salt has a great hard luck story about his tough past — and, boy, does he tell it well. Telling you his hard luck story is a neat ploy. You only have to respond like the uber-caring, empathic, trusting person you are for him to know you are his perfect… prey.
You notice worrying back stories about women. Yep, he’s the one who’s suffered at the hands of women who didn’t understand nor appreciate him. He’s been let down, treated badly, exploited, and robbed blind by past wives and/or girlfriends. His bitterness about these predatory b**ches sends a clear message about how he wants you to behave: no demands, no expectations, just 100% commitment to healing his hurts.
He has a bad behavior — or three — that needs to be fixed. That could include drug taking, alcohol abuse, leering at women, tight-fistedness, or anger issues. He’s a little bit broken, but hey, your middle name is Ms. Fix-Him.
He’s domineering, and/or jealous, controlling and self-centered. You can tell yourself he’s just “being a man,” but the reality is that he is establishing a power (im)balance in the relationship. It works on the principle that he has the lion’s share of the power, and you get the lion’s share of responsibility.
He gets star billing in the relationship — with all that, that entails — while you get to play the bit parts. He gets most of the airplay, and the limelight, etc. as befits the star. It won’t be too long before he lets you know that your job is to keep his trailer nice and tidy.
He has a short fuse. “Slow to anger,” “quick to forgive and forget,” and willing to own up to his own mistakes, are NOT accurate descriptions of him. He’s easily upset, he overreacts, and as he tells it, the problem was not of his making in the first place — so, he rarely has to get his head around the “S” word (that’s “SORRY” to you and me). He may well be a “potty mouth.” He certainly doesn’t react in a measured, adult way when he feels peeved and aggrieved.
He’s not 100 percent reliable, consistent or predictable. “Something comes up” or he’s feeling too tired or he’s been really, really busy. Showing consideration for you, your wishes, and your feelings is not his top priority.
He doesn’t let you have boundaries. He asks inappropriate personal questions early on. He rushes you and the relationship. He sets himself up as the authority on every area of your life — including family, friends, your working life, and even your finances.
He sets off warning bells in your gut. There was that moment right at the start when, from somewhere deep inside you, there bubbled up the awareness: “YUK. This guy is bad news.” Sadly, that feeling didn’t come with a 20-page PDF report, a government health warning, or even banner headlines anywhere you looked. So what did you? You ignored that feeling. “Listen, if it can’t give me a chapter and verse, why should I pay attention to it? It’s making a lot less noise than he does. Besides, he might be my last chance at happiness, right?” Your intuition doesn’t obsess about the past, or worry about the future. It simply comes to the right conclusion in the present moment. Its predictions are far more clear-sighted than yours are.
If you want to keep yourself safe from emotionally abusive men, you have to learn how to spot them. Emotionally abusive partners create massive mental, emotional and financial havoc in their victims’ lives. This article is here to spare you heartache and disappointment. Don’t be too blind to see them.