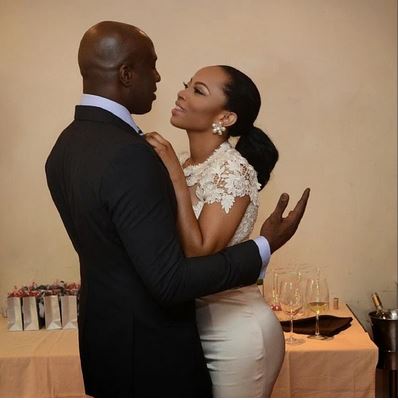 *Toke Makinwa and Husband during their wedding

The 30-year-old beautiful woman known for co-hosting The Morning Drive on Rhythm 93.7 FM got married to her on and off boyfriend, Maje Ayida(who is also a health instructor) in a surprise wedding in 2014.  The wedding, came as a surprise to many because it happened at a time when every onlooker taught they might be parting away. 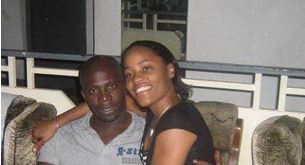 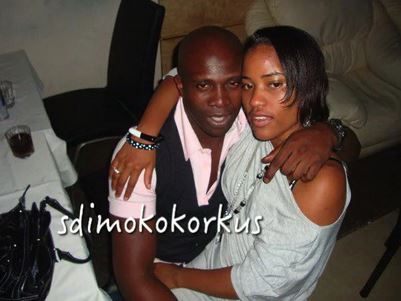 Yesterday, reports made it known that Maje Ayida has impregnated his former girlfriend, Anita Solomon and she  is currently in the UK to deliver their baby. According to Stella Dimorkokorkus, Anita is partly a Lebanese and partly Calabar. Anita is also a lawyer who runs a beauty salon in Calabar. Ayida and Anita have been in a relationship for the past 8 years but broke off briefly when he got married to Toke.

An anonymous source who confirmed to Stella Dimorkokorkus made it known that  Maje is the sole sponsor of Anita’s multi million salon in Calabar. He is said to frequent Calabar just to see Anita always.has been making trips to the state to visit her. Confirming the story, the anonymous source said:

‘‘It’s so true!!!!!!!! 100% confirmed. Anita is in UK to have Maje’s baby. I visited her Aunty and they confirmed she’s pregnant for a married man from Delta,one Maje.They are so disappointed in her because he left her and got married to Toke and came back to side chick her.Family say they dated for about 8years….”

This news has made ‘Toke’ the number one trending topic on Twitter Nigeria. While some of her fans are very angry with her husband for impregnating an ex, some called out the vlogger who vlogs mostly  about topics on how to keep hold of your man. Toke Makinwa has however not said a word about the story.

There are unconfirmed reports that the beautiful vlogger has been aware of all these happenings because her husband was said to have been dating Anita alongside herself at the same time. It was made known that the vlogger who made it known on her twitter account sometime back that she and her husband her not ready for babies, has been trying to have a baby for Ayida. The baby, Toke Makinwa thinks might saved her from the extra marital relationships.

A few hours before the news broke, here are the few tweets she tweeted: 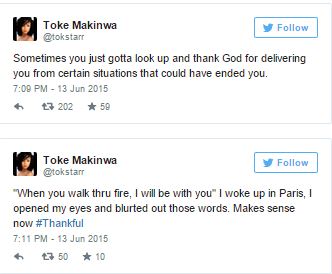 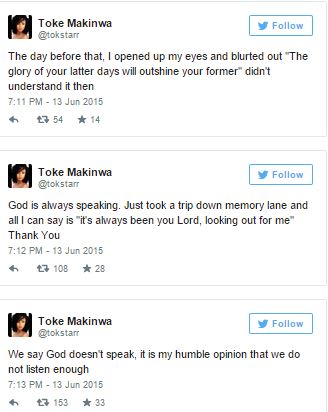 Just one week ago, Maje Ayida had his birthday and his wife, Toke, wrote him a loving birthday message.