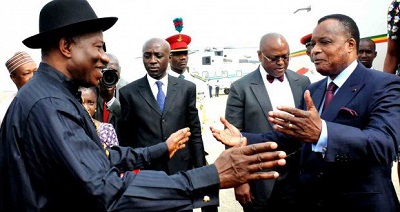 The leaders met behind closed-doors for about three hours at the Presidential Wing of the Nnamdi Azikiwe International Airport, Abuja.

Their visit came on the heels of the decision reached by the Heads of State and government of the Economic Community of Central African States (ECCAS) during their summit in Yaoundé, Cameroon, on February 16.

The three Presidents also welcomed the proposal to have a joint Summit of the Economic Community of West African States (ECOWAS) and ECCAS to further mobilise international support for the Multi National Joint Task Force (MNJTF).

While President Jonathan promised to contact the ECOWAS Chairman on the proposal, the visiting Presidents undertook to relay the outcome of the meeting to the other Heads of States and Government of the ECCAS.

A release at the end of the meeting reads: “The visiting Presidents held very warm and useful discussions with their host on issues of common interest to the countries of the Economic Community of West African States (ECOWAS).

“They unequivocally condemned the insurgency, its destructive activities such as indiscriminate killing of peoples and the wanton destruction of properties, the abduction of innocent women and children, especially young school girls, who had been turned to s*x slaves.

“They underscored the imperative of a multi-prolonged approach to fighting the terrorist group and in particular, commended the initiative of the member states of the Lake Chad Basin Commission (LCBC) for a Multi-National Joint Task Force (MNJTF) to combat the Boko Haram insurgents.

“They welcomed the active support of the international community especially the African Union, the United Nations and other partners for the efforts of the LCBC and the Benin Republic to enable the earliest deployment of the MNJTF.

“While underscoring the fact that the MNJTF is wholly owned and driven by the member states of the LCBC, they urged the international community to render necessary material and financial support and assistance to its on-going efforts”.

Speaking with reporters at the end of the meeting, President N’Guesso said they deliberated on the Ebola Virus Disease and insurgency in the region.

He said: “As we know Africa is confronting two challenges. Significantly, Ebola is affecting basically countries in West Africa. These countries are: Liberia, Guinea and Serra Leone. Also, the operations of the terrorists generally affecting countries in the Sub-Saharan Africa and in northern Africa, particularly Boko Haram which has been affecting Nigeria, Chad and Cameroun.

“Like you know at the last meeting of the Africa Union, the Heads of State took some very important decisions principally to check the Boko Haram attacks in Nigeria, Niger, Cameroun and Chad. Following the meeting of the African Union, the Economic Community of Central African Countries had a meeting recently in Yaoundé to address particularly the Boko Haram challenge in Africa and to see the possibility of ameliorating the grave situation”.