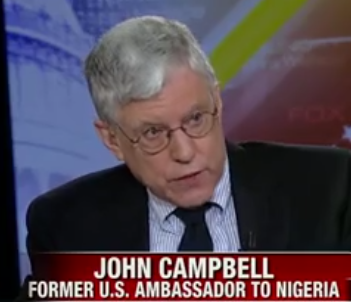 A former United States’ ambassador to Nigeria, John Campbell, has warned of likely large scale violence in the March 28 and April 11 elections.

This view, contained in a new report published and released by the US’ Council on Foreign Relations and authored by Campbell, warned that the 2015 elections may “precipitate violence that could destabilise Nigeria”.

The report noted that the US government was at a cross roads as its influence on the Nigerian government has waned over the years.

“The upcoming elections are a rematch of the 2011 elections between the incumbent President Goodluck Jonathan (a southern Christian) and Muhammadu Buhari (a northern Muslim and a former military chief). Tension between Washington and Abuja is higher than in 2011, largely over how to respond to the radical Islamist insurgent group, Boko Haram, which is steadily gaining strength in northeast Nigeria”, it said.

“The APC is stronger than its predecessors (Action Congress of Nigeria and Congress for Progressives Change) and reflects a splintering of the political classes. The government’s inability to defeat Boko Haram, the economic hardships brought on by falling oil prices, and a growing public perception that the Jonathan administration is weak have fueled support for the All Progressives Congress. Though the APC’s voter base is in the North, it enjoys support all over the country, unlike the opposition in 2011”, Campbell stated.

The former ambassador, however, noted that Jonathan had significant advantages over Buhari. According to him, the president is “is at the centre of extensive patronage networks; he has access to the government’s oil revenue; and he and his party largely control the election machinery and ballot-counting infrastructure”.

Though Campbell admitted that would-be voters in Adamawa, Borno and Yobe – states worse hit by insurgency – were likely to cast their votes for Buhari and the APC, Jonathan was more likely to emerge winner of the election.

“It is uncertain whether any provisions will be made for voters in the three northern states placed under a state of emergency because of Boko Haram, as well as the estimated one million people displaced by the insurgency. These displaced voters would likely support Buhari and the APC; their exclusion would benefit Jonathan and the Peoples Democratic Party (PDP). Thus despite the strength of the opposition, Jonathan remains the likely – but not certain – winner”.