PHOTOS: See Newborn Twins Joined With One Heart Who Can Not Be Separated

Twin girls who were born joined at the chest and share the same heart could not be parted, surgeons in Vallenar, Chile have said.

Siamese girls Anais and Amanda were born five months ago and have remained under surveillance of doctors until and it became clear that separation surgery is not possible. The babies were born with a cyanotic heart, which means each girl had a heart, but their organs were positioned so close together that they merged into one. In many cases of this type, one of the twins may often be sacrificed to allow the other one to live a normal life.

Dr Humberto Caballero, who is caring for the twins, said, “The twins were sent to have tests done now that they are five-months-old. The conclusion is that the girls hearts are joined, and as a result the babies will have to remain together. The heart condition means that it’s impossible to separate them and it would also be out of the question to remove one so that the other might live and develop normally.” 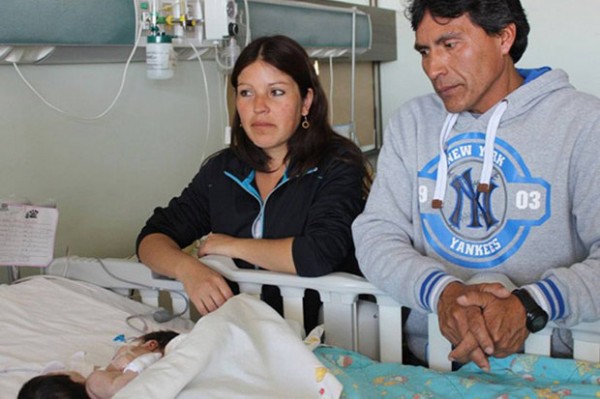 Only 35 per cent of cojoined twins survive for one day after birth, however, among those who survive more than a day after birth, some continue to live for days, weeks, months or years while conjoined.  Althought the diagnosis isn’t associated with a long life expectancy, twins’ parents are not going to give up. They say, “As long as they are here it is heaven’s will, and we will care for them.”