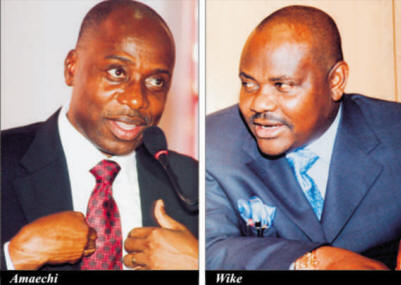 Governor Rotimi Amaechi of Rivers State on Thursday described as bogus and “tales by moonlight”, the claim by the governorship candidate of the Peoples Democratic Party in the state, Nyesom Wike, on the state government’s expenditure.

The PDP flag bearer had accused Amaechi of running the most corrupt regime in the country, alleging that the governor had between January and November 2014 squandered over N298bn that accrued to the state from the Federation Accounts and loans obtained from various commercial banks.

Wike further alleged that between December 2014 and January 2015, the governor, through the Government House and the Office of the Secretary to the State Government, expended N11bn believed to have been funneled to the Buhari Campaign Organisation, of which the Rivers governor is its Director-General

But Amaechi, in a statement by his Chief Press Secretary, Mr. David Iyofor, said Wike’s verbal attack during his recent campaign rallies in Port Harcourt and Obio-Akpor were outright lies aimed at deceiving gullible members of the public.

He said, “It (Wike’s claim) is a failed attempt to tarnish his (Amaechi’s) sparkling image. But he (Wike) should know by now that the people are not gullible and know that Wike is rather an embodiment of corruption and everything that is wrong with our country”.

The governor urged the people of the state and Nigerians in general to disregard Wike’s allegations, describing the former minister as a drowning man desperate to score cheap political points by falsifying figures and spreading falsehood.

The statement read in part: “That Governor Amaechi runs a transparent, accountable administration has never been in doubt. Everything about the income and expenditures of this government is in the public domain and has never been shrouded in secrecy. So, Wike’s ignominious attempt to dish out cooked figures will never fly.

“Is Amaechi a candidate in the governorship elections? Why has Wike insisted on campaigning against someone that is not a candidate? Is Wike clearly telling the public that he is no match for the APC governorship candidate, Dakuku Peterside, and the only way to divert attention is to keep making wild, spurious claims?

“Of course, it is glaring that the Dr. Dakuku Peterside is by far, a better choice than Wike. The two can’t be compared in terms of character, attitude, performance and achievements in public service”.