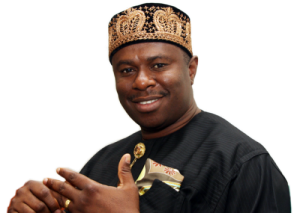 The governorship candidate of the All Progressives Congress in Rivers State, Dr. Dakuku Peterside, has said his administration will achieve an era of zero crime if voted as the governor of the state next month.

Peterside made the pledge in Port Harcourt, the state capital on Monday while unfolding his blueprint for the growth of the state should he emerge the winner of the February 28, 2015 governorship election in the state.

The APC governorship flag bearer aid the issue of youth employment would also be given a top priority so as to be able to achieve a zero-crime level in Rivers within the next 10 years.

Peterside added that his administration would invest in security infrastructure through the provision of CCTV cameras and security helicopters.

He, however, recalled that the current governor, Mr. Rotimi Amaechi, had purchased two helicopters outfitted with modern security gadgets for security purposes but the PDP-led Federal Government did not approve documents for their use in the state.

“We will achieve zero crime in Rivers State. We will put in place security infrastructure through the provision of CCTV cameras and security helicopters. You know what happened between Governor Rotimi Amaechi and the Federal Government when the governor acquired security helicopters for the state.

“We intend to establish a Rivers State Security Trust Fund. We will be in active partnership with the community and the establishment of ‘Operation Know Your Neighbour’. Security is the responsibility of government and we will not fail to protect lives and property”, Peterside added.