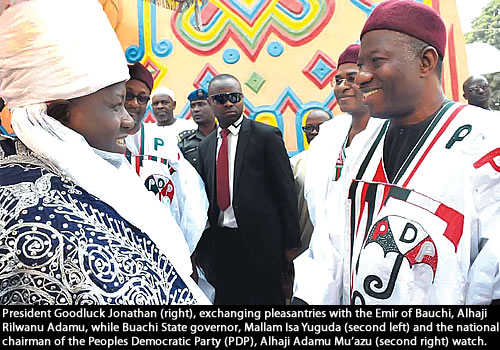 The governor cleared the All Progressives Congress (APC) of complicity in the embarrassing episode, which occurred as the president’s convoy made its way to the Emir of Bauchi’s palace. The national leadership of PDP as well as the Presidency had fingered the opposition APC in the attacks, which came on the heels of a similar incident in Katsina State.

But Gov. Yuguda, who is a member of the PDP, in an interview with the BBC Hausa Service yesterday, said the incident was pre-arranged to tarnish his reputation before President Jonathan.

“I am sure and let the world know that the people who did this thing were PDP members and those politicians in Abuja were the ones behind it; they were not APC members.

“They found these youths on the road and gave them brooms and they instructed them that when the president was passing they should raise the brooms and pelt them at him.

“We were not aware of the plan ahead of the rally. They took us by surprise. Did you ever heard of such a disgrace to any guest in Bauchi, let alone the president?” he asked.