Jennifer Lawrence has hit the ground running – and in high heels no less – following her Golden Globes win in New York City where she was spotted making the talk show circuit in style.

She’s only 22 but the Silver Linings Playbook star looked every inch the glamorous movie queen in her fashionable black double-breasted coat with furry lapels as she dropped by a studio.

Model chic: Jennifer Lawrence was riveting in a black trench coat and black peep-toe heels on her way to tape Late Show with David Letterman on Tuesday

Even though the winter wrap was tied snugly at the waist, every now and then onlookers got a peek at her bright red dress underneath.

Jennifer wore no stockings and went bare-legged in the chilly air in a pair of peek-toe black high heels.

Her famously flowing honey-hued hair was softly curled and layered around her porcelain-skin face. 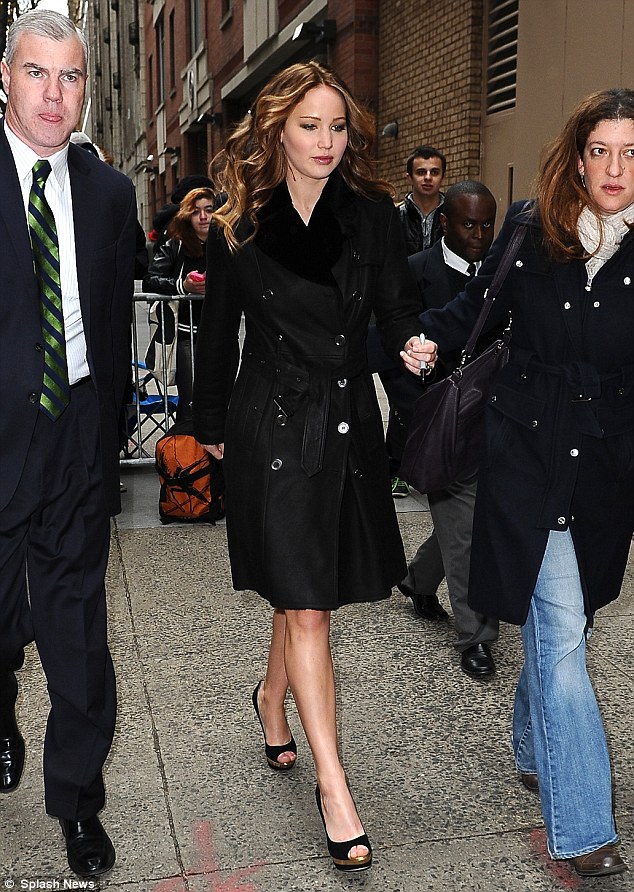 So confidant: Jennifer is still high from her Golden Globe best actress win where she beat out such contenders as Meryl Streep

Gracious: Jennifer continued to walk with a pen in her hand after doling out autographs to the crowd of fans waiting outside the New York studio

On Tuesday Jennifer stopped by the Late Show with David Letterman where she no doubt chatted about her thrilling win at the 2013 Golden Globes in Los Angeles on Sunday.

That’s just the beginning of a hectic week of talk show appearances that still lay ahead. 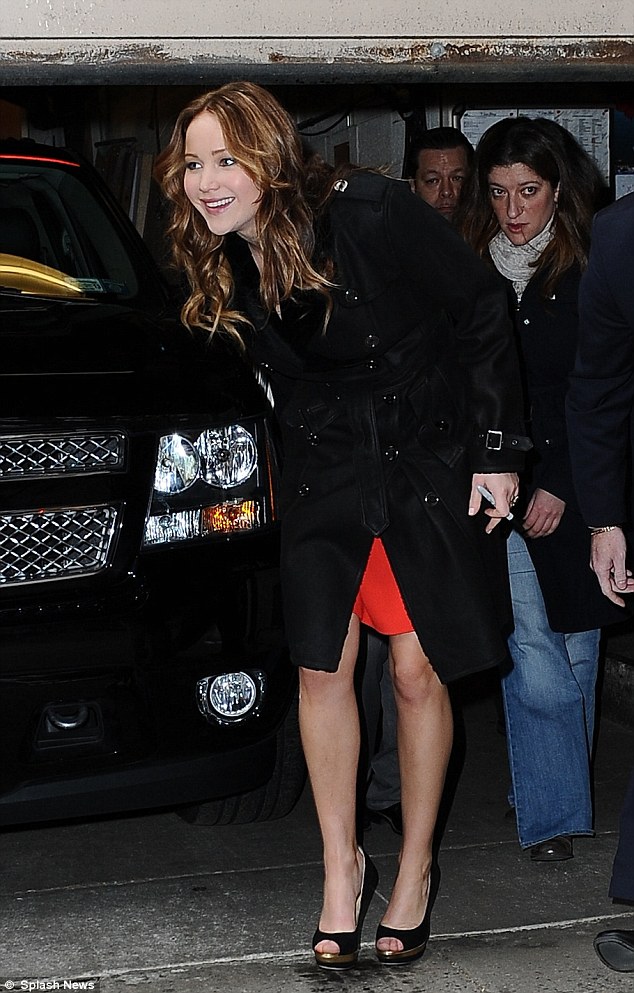 Ravishing: Jennifer flashed a smile and the hem of her red dress while ducking from under the garage door 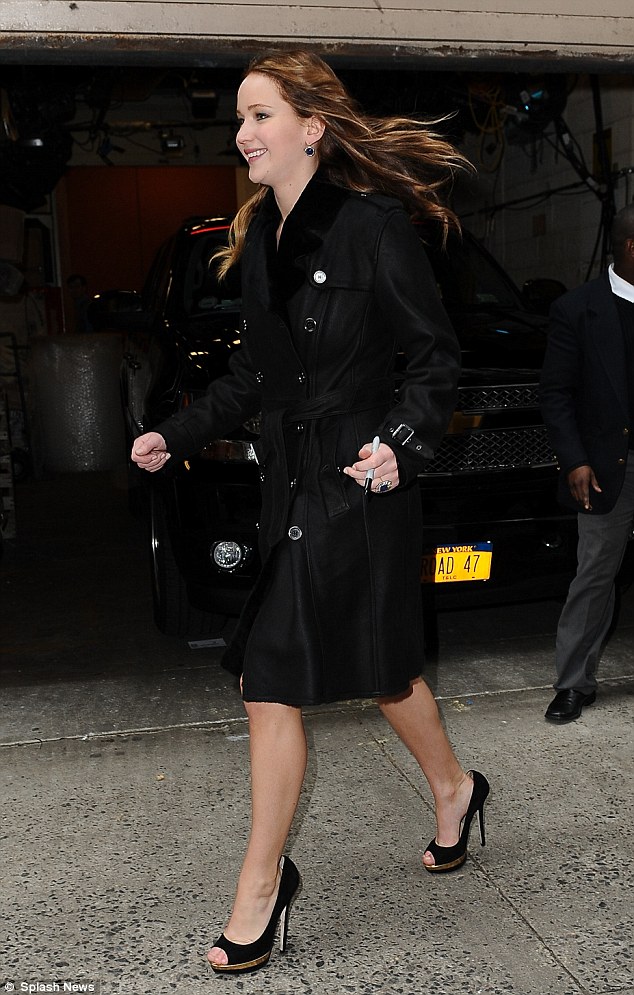 Runaway star: Jennifer makes a dash to the studio while wearing a pair of very fashionable high heels

Then this weekend Jennifer will be hosting Saturday Night Live where she can put more of that offbeat comedy style to use.

Jennifer showed her flair for humour when accepting her Golden Globe for best actress in Silver Linings Playbook she began by declaring: ‘I beat Meryl!’

Jennifer is on a high on the professional front as she is also filming the exciting sequel The Hunger Games: Catching Fire, which is due for a November 22 release. 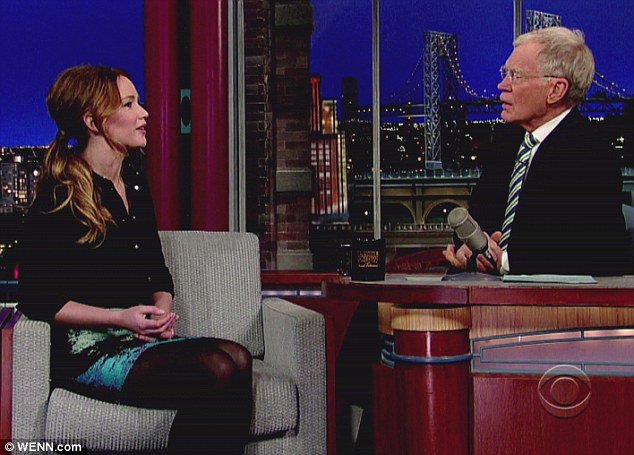 On the tube: Later that night Jennifer appeared on Late Show with David Letterman where she talked about winning a Golden Globe for her role in  Silver Linings Playbook 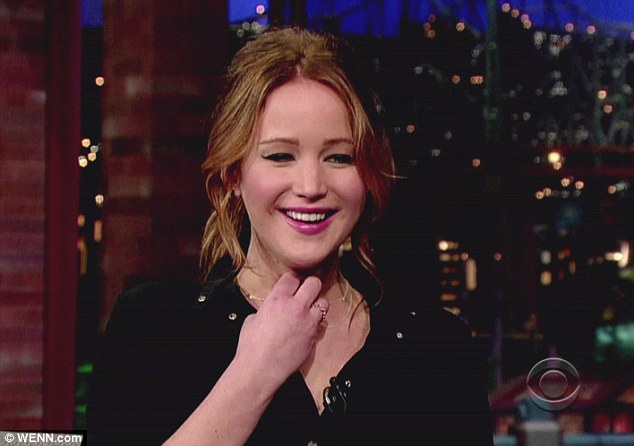 Lots of laughs: The actress had a giggle as she chatted to the talk show host 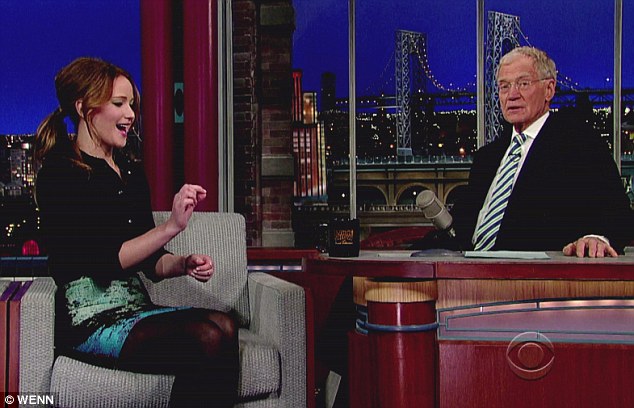 Cute and chic: Jennifer had changed into a cute and chic black shirt and colourful miniskirt combination which she paired with tights

Romantically speaking, the actress recently ended a two-year relationship with Nicholas Hoult, whom she once described as her ‘best friend.’

For those who are still hoping for a romance between Jennifer and her Silver Linings Playbook co-star Bradley Cooper think again.

Cooper, who broke up with actress Zoe Saldana earlier this month, denied that he is dating Jennifer, telling ET that he is ‘old enough to be her father.’ 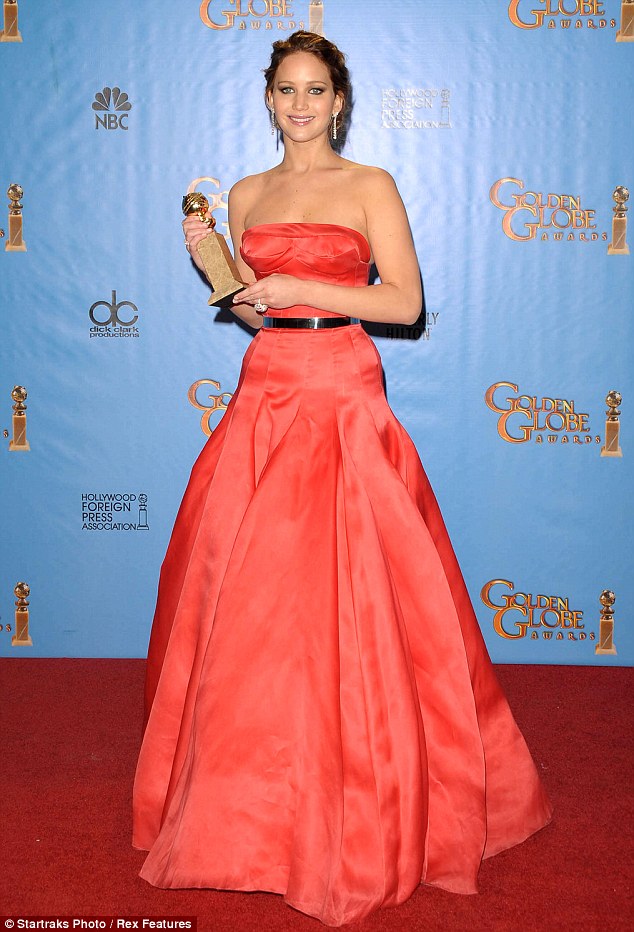 Queen of the night: Jennifer holds her Golden Globe award after winning Best Performance by an Actress in a Motion Picture – Comedy or Musical, while looking stunning in a coral gown