Britain’s Got Talent: Alesha Dixon shows off her talents… in a daring slashed to the thigh cutaway dress as BGT gets underway

It may have been just above freezing, but Alesha Dixon showed some serious skin as the Britain’s Got Talent auditions kicked off on Wednesday.

The former Mis-teeq singer showed off her toned legs and arms in a slashed-to-the-thigh black skirt and black polo neck sleeveless top as she arrived at the Cardiff auditions.

The 34-year-old completed her outfit with a pair of peep-toe heels and a chunky Aqua belt, with her hair styled poker straight.

The thigh’s the limit! Alesha Dixon made sure she made an impact as she arrived at the Britain’s Got Talent auditions in a daring thigh-slashed dress 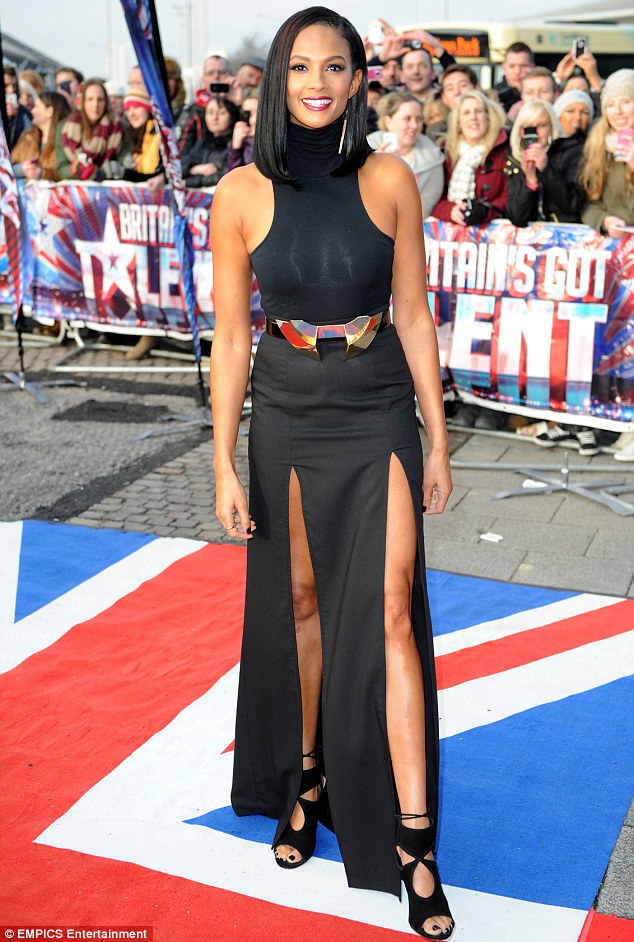 Alesha’s Got Talent: The BGT judge showed off long legs in a racy skirt as auditions got underway in Cardiff

Ahead of her arrival at the Millennium Centre, Alesha had been enjoying some Twitter banter with David.

After one of the auditionees complained it was freezing waiting for the judges to arrive, David replied: ‘I will be there first. The other judges all take about 10 hours in make-up.’ 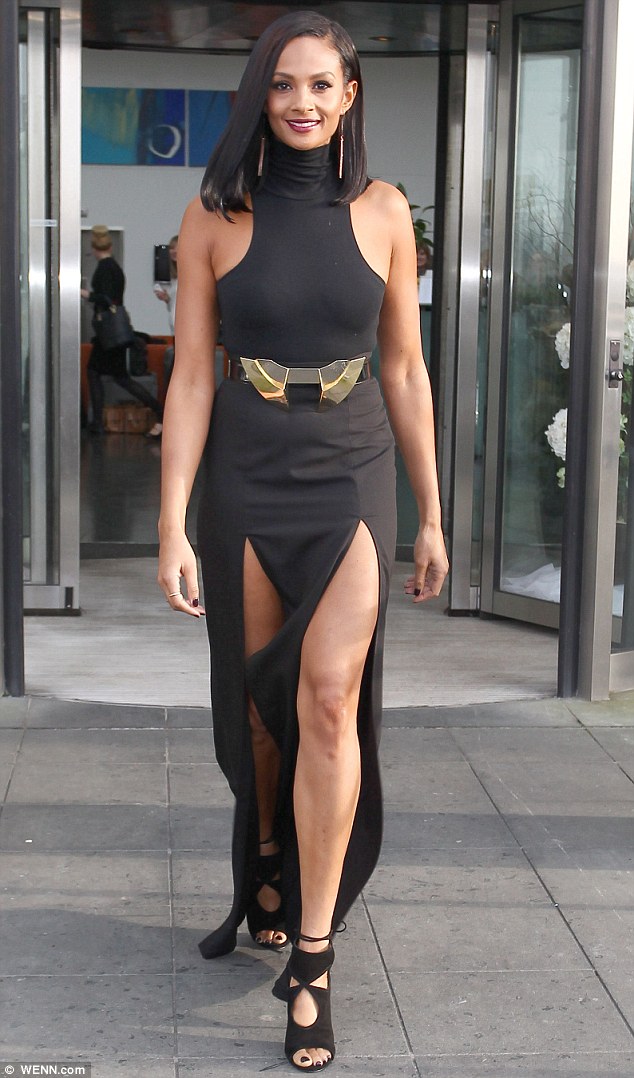 Strutting her stuff: Alesha paraded her long, lean legs as she braved the cold in Cardiff

Hello Cardiff! Alesha looked glad to be back on the panel after making her debut last year

When David boasted he would still be there first, Alesha responded: ‘Probably not! Hahaha.’

The
comedian had also been teasing Simon ahead of the auditions, referring
to their fictional gay romance, which he started joking about on last
year’s series.

He tweeted last night: ‘@SimonCowell I checked into the hotel in Cardiff for BGT, they have given us a lovely room. Just running you a bath…’ 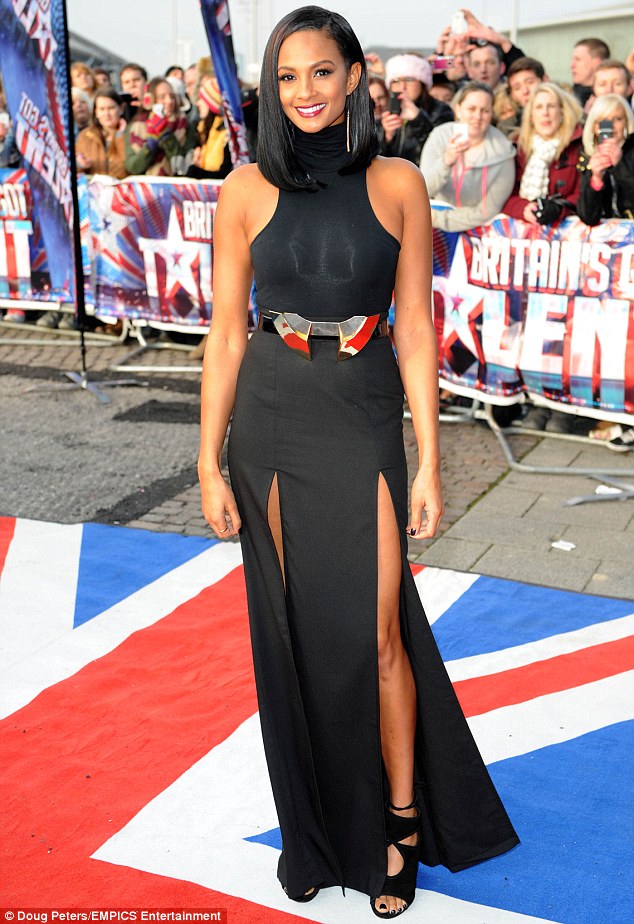 A daring choice: The BGT judge left little to the imagination with her sexy ensemble

Slinky: Alesha seemed to be in great mood as she laughed and joked with her fans outside the venue 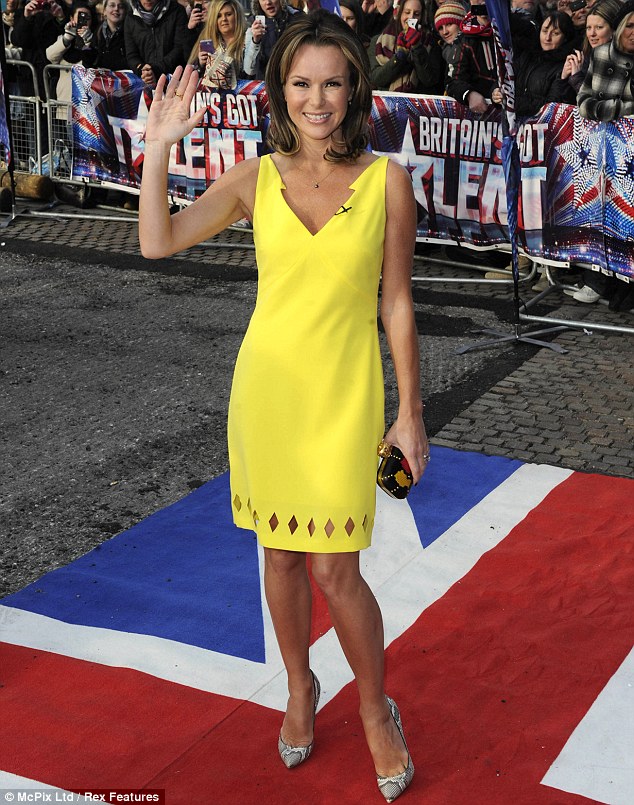 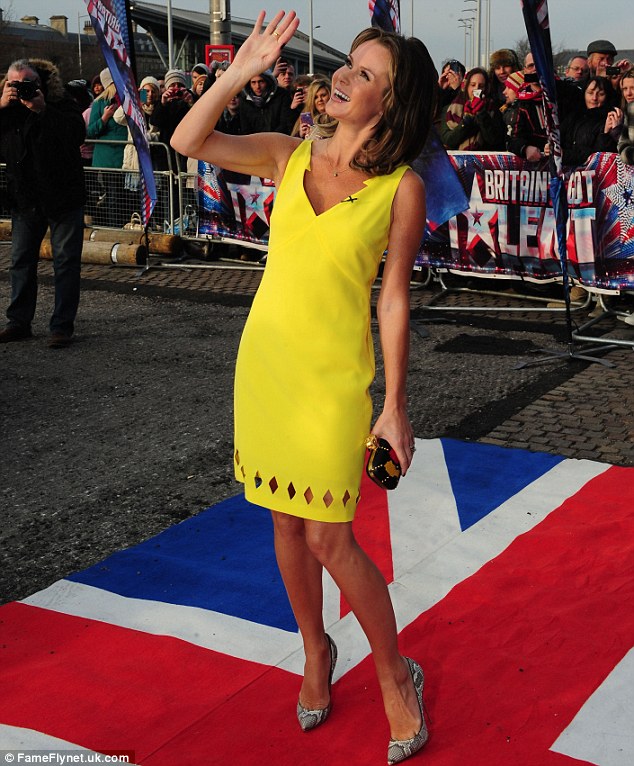 Mellow yellow: The mother-of-two teamed her pretty dress with a pair of fierce snakeskin stilettos by Christian Louboutin

And on Wednesday, he joked he would be wearing a red dress: ‘@SimonCowell I am going to wear the
sparkly red dress for the BGT Cardiff auditions today. You always said I
look beautiful in that.’

Actress Amanda was clearly excited about returning for the auditions as she arrived in a yellow Versace dress and snake-print Christian Louboutin heels.

She tweeted: ‘Amanda:
Yay! Its BGT day! Cannot wait!! I’m not gonna lie to you! My tummy is
churning with excitement!!!!#showuswhatyougotwales.’ 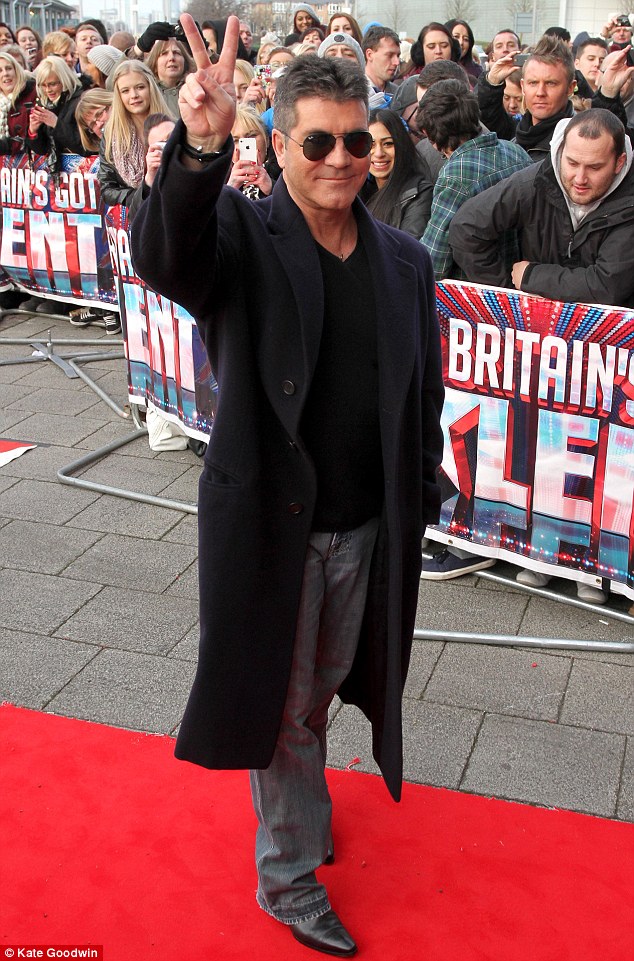 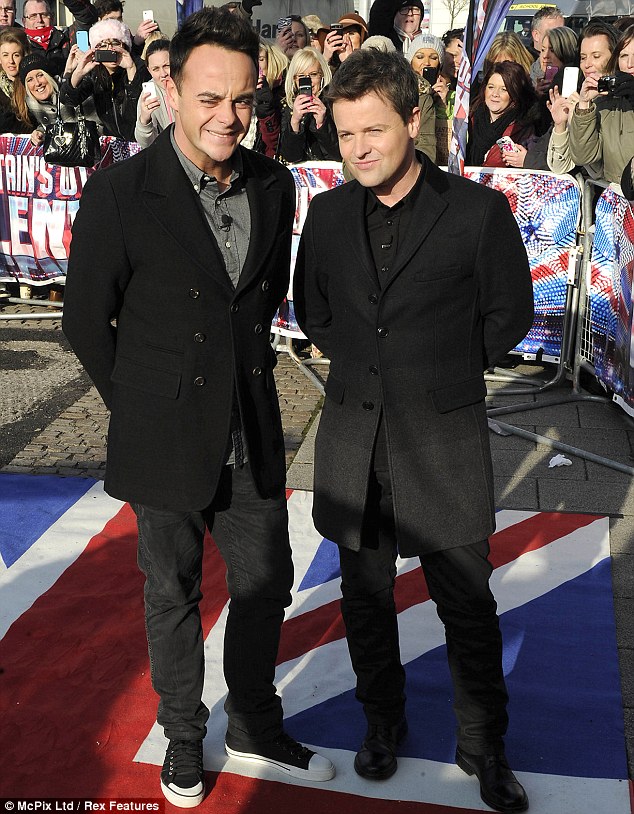 It’s a chilly job, but someone has got to do it: Hosts Anthony McParlin and Declan Donnolly chatted to auditionees outside

Good morning! Ant and Dec seemed to be in good spirits as they left their hotel on Wednesday morning

Last year, she was forced to miss
several auditions after she became seriously ill following the birth of
her youngest daughter Hollie last January.

However, after recovering from her traumatic ordeal, she was back at work just two weeks later.

Meanwhile, ahead of the auditions kicking off, the judges made a pit-stop outside their hotel to make friends with a trainee guide dog.

Simon and David are both noted dog lovers and couldn’t resist a stroking session with the adorable puppy. 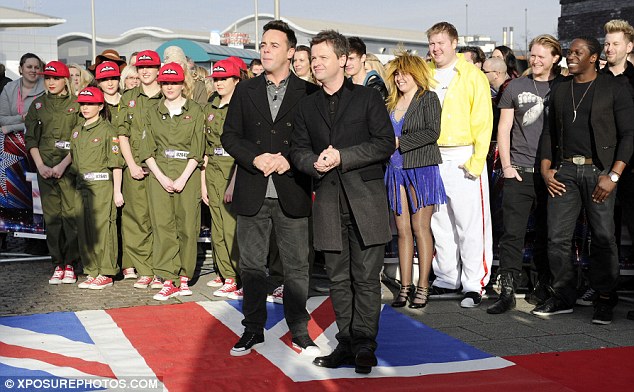 Is the next Diversity behind them? Ant and Dec film a segment for camera with some wannabe stars 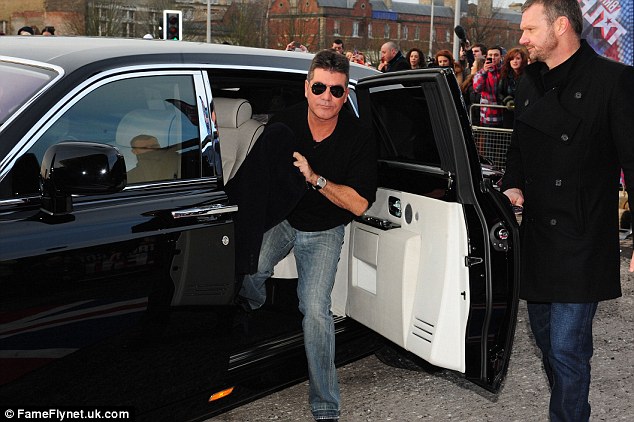 Travelling in style: Simon rocked up in a flash car 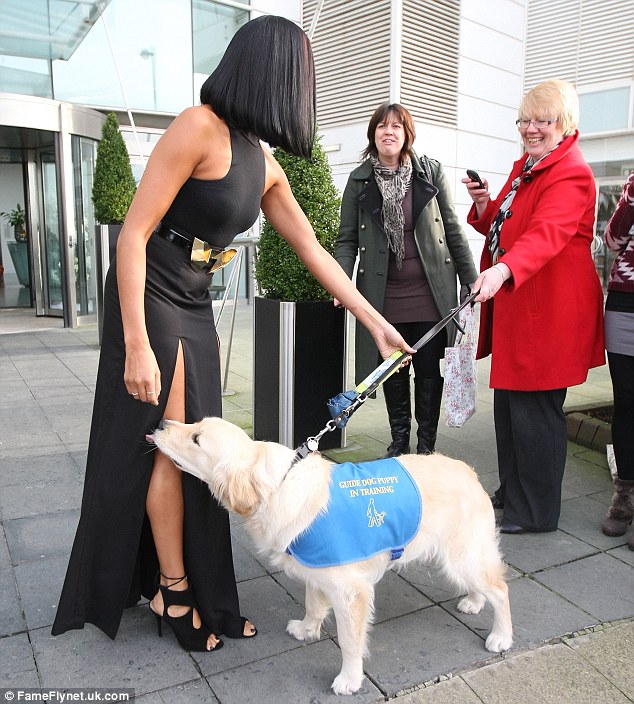 That tastes good: Travis licks Alesha’s dress as she talks to his owner 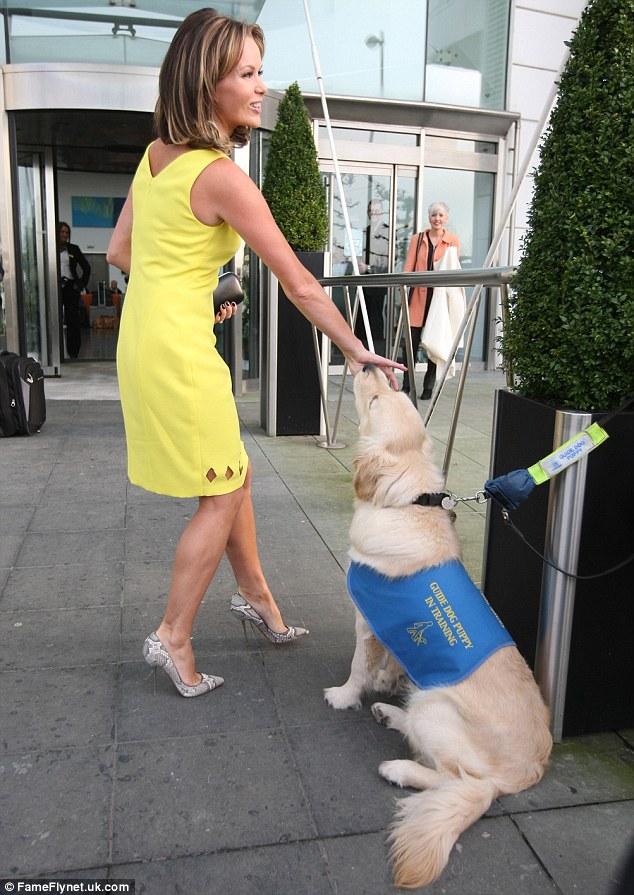 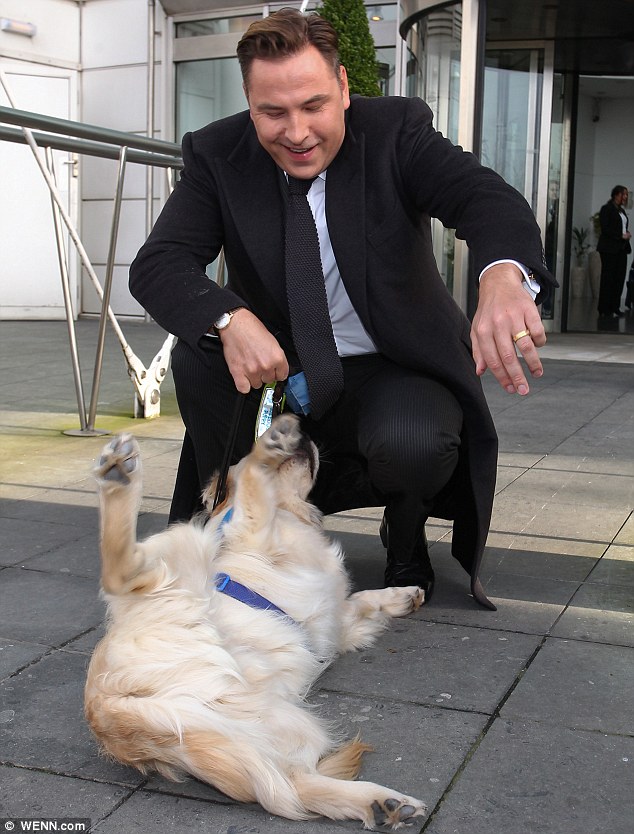 New pal: David seemed to be having a whale of a time as he played with trainee guide dog Travis as the judges left their hotel in Cardiff