With her wide-eyed innocence and coy smile, Anna Kendrick is the epitome of the all American sweetheart.

But it seems there is more to the actress meets the eye after she made a shock confession on her Twitter account on Monday night.

The 27-year-old wrote that she pleasured herself in the back row of a movie theatre while watching Ryan Gosling in his latest film Gangster Squad.

Butter wouldn’t melt: Anna Kendrick caused controversy with her admission that she pleasured herself while watching Ryan Gosling at the cinema

Like many women, Anna appears to have a crush on the 32-year-old actor who is fast becoming a global heart throb. 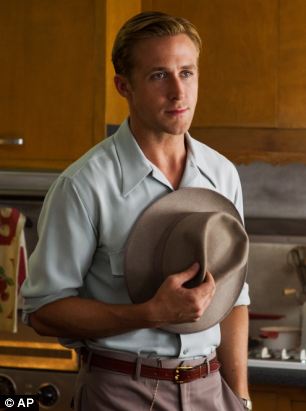 And it seems the actor’s latest
performance got her so hot and bothered, she took to Twitter to share
her lust with more than 600,000 followers.

It has been retweeted nearly 25,000 times since Tuesday evening and has also been favourited more than 21,000 times.

Most of the comments on the inappropriate tweet found it hilarious or expressed agreement with Kendrick’s sentiment.

For instance, Twitter user @1D_For_Me101, who apparently loved her remarks, according to his or her response to her tweet: ‘@AnnaKendrick47 HAHAHAHA you’re actually amazing omg. I wish you followed your fans cause I would DIE to be followed by you!’

And, according to @whereishawkins, Kendrick is not the only person engaging in illicit behavior during Gosling’s films: ‘@AnnaKendrick47 the hell it is! I do that at Gosling movies and I never get in trouble,’the excited Twitter user tweeted.

But not all of the responses were
positive, as evidenced by the offense taken by @lucyhalenation, who
posted the following disapproving comment: ‘@AnnaKendrick47 uhm you didn’t warn me before I followed you that your tweets are NC-17’ 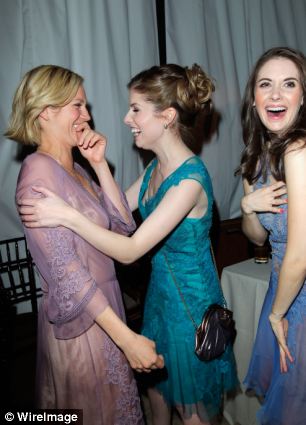 Hollywood high life: Anna has grown up in the glare of the spotlight both onscreen and off

However, while the cyber frenzy would cause
embarrassment to most people, Anna is used to the being the centre of
attention having started her acting career as a child.

She won her first major role at the age of 12 as Dinah in the Broadway musical High Society in 1998.

Kendrick
went on to appear in a number of other theater productions, including
the musical A Little Night Music, before making her film debut in the
2003 musical comedy Camp.

But
it was her performance as Natalie Keener in the 2009 film Up In The
Air, opposite George Clooney, that brought Anna to mainstream attention,
winning her an Academy Award nomination for Best Supporting Actress.

While
she may confess to having a crush on Ryan Gosling, the actress is in
fact happily settled with her long-term boyfriend, director Edgar Wright.

The pair have been dating since 2009, when they met during the production of Scott Pilgrim vs. the World.