She’s looking forward to the birth of her first child.

But Kim Kardashian has revealed that her unplanned pregnancy was  more than just a happy accident – as she has ‘fertility issues’.

‘Khloe has been very open about her fertility issues and I think I was
always really kind of quiet about mine, and I have similar issues,’ she told the Today Show.

All in yellow: Kim Kardashian shows off her pregnancy curves in a clinging floral dress as she arrives to film Live With Kelly And Michael in New York on Tuesday morning

Fashion forward: She might be expecting, but Kim is as in trend as ever in her peplum dress with side cut outs and nude court shoes

Kim’s younger sister Khloe has openly
talked about her failure to conceive during three years of marriage,
with initial fertility tests revealing she was not ovulating.

Meanwhile Kim has been dating her boyfriend Kanye West for nine months and is expecting their baby in July.

Kim explained of her pregnancy: ‘It was a pleasant surprise when so many doctors were telling me one
thing and then the opposite happens.’ 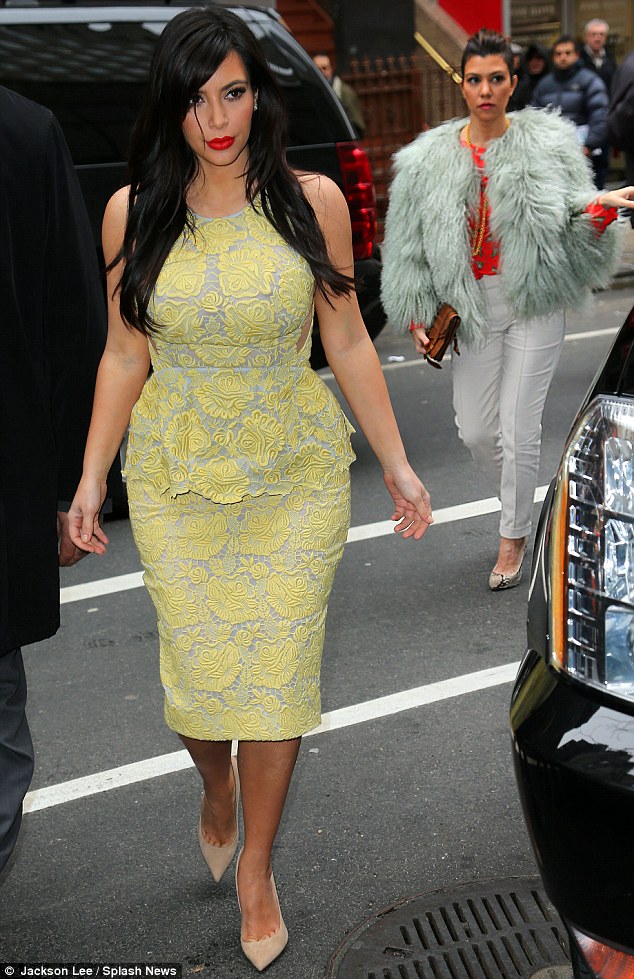 Sister act: Kim was joined by Kourtney at the interview

The 32-year-old said she found it hard to believe she was really going to be a mother.

However their is one thing disrupting KIm’s perfect life – her failed marriage to Kris Humphries.

Despite filing for divorce from the basketball player after just 72 days in 2011, the two have yet to finalise their divorce. 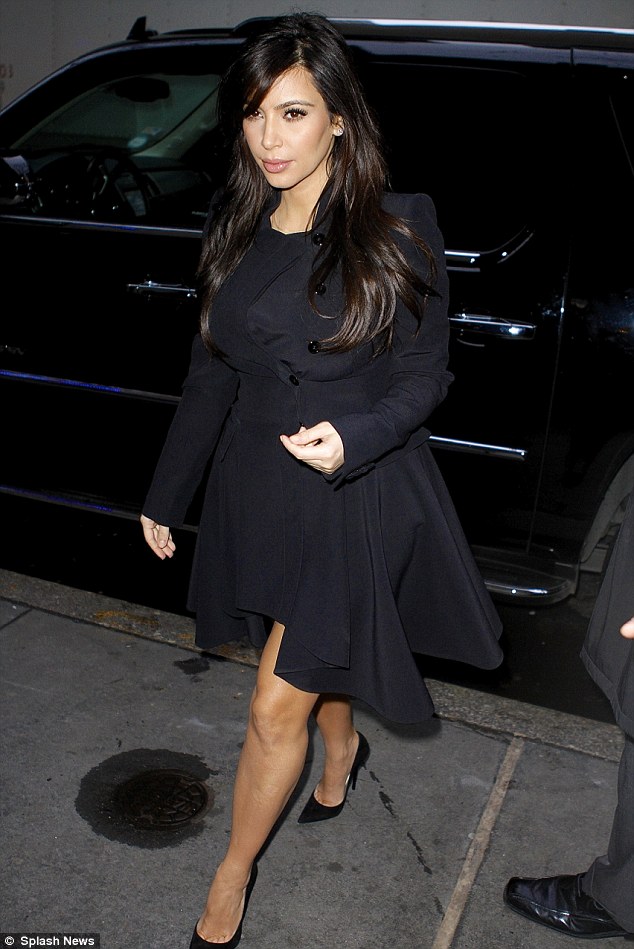 Opening up: Kim Kardashian arrives to speak on the Today Show in New York on Tuesday

Best foot forward: Kim shows off her toned legs in her short skirt

Kris has refused to sign papers ending the marriage.

On the Today Show Kim explained: ‘I
can’t speak for anyone else [about why Kris hasn’t signed]. It’s a
process. … It’s happening, hopefully.’

She also talked about the possibility of a third marriage, to her rapper boyfriend.

‘It’s
something that we talk about, but I think it’s just, right now, focusing on the baby,’ said Kim. 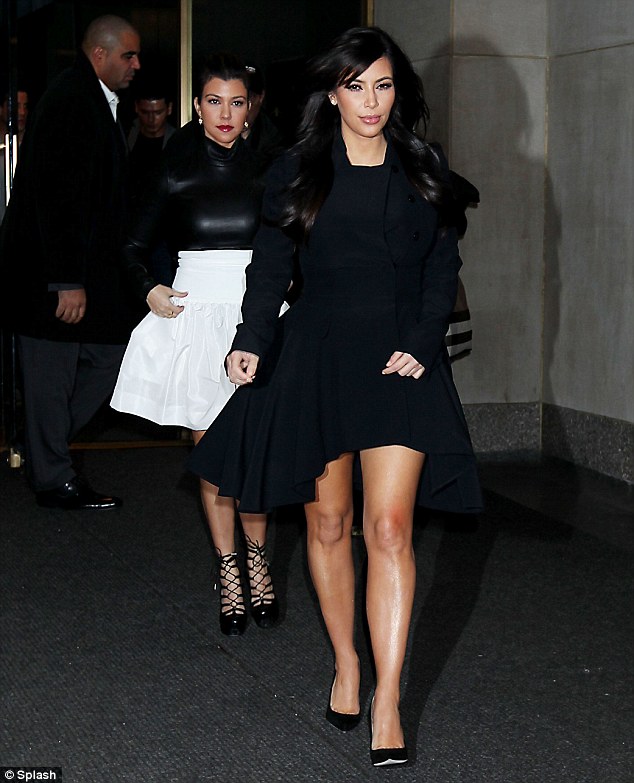 Stepping out: Happy Kourtney looked full of beans, despite the early hour

‘[I’m] so content with how things are
right now. And how life is and we’re so happy. We definitely want that
in the future, but I’m not in a rush.

‘What I’ve learned in life is – I was
always such a planner, and… you think your life is going to be a
certain way, and the best surprises just happen when you don’t plan.’

The baby news was made public when Kanye, 35, announced it on stage during a concert on December 30. 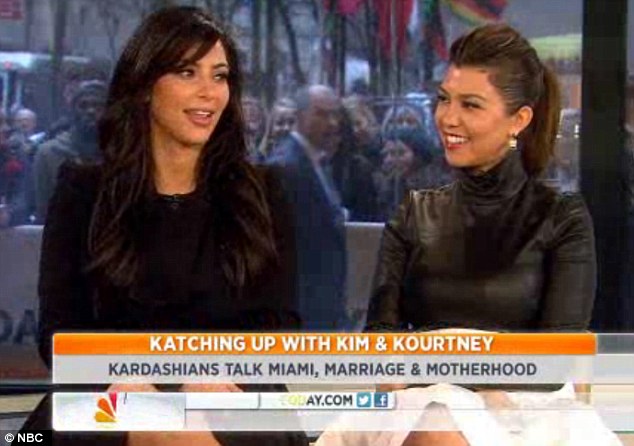 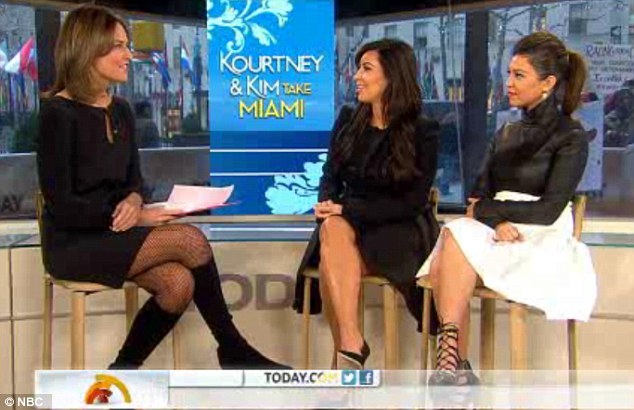 Excited: Kim shared her joy at her baby news

While Kim was surprised he announced her pregnancy, she was happy for him to do so.

She said: ‘Once you’re past the
three-month mark, you’re pretty safe, so he just kind of goes off with
what he feels and he was feeling it that night.’

Kim wore a black dress which showed off her toned legs for her TV interview.
She was with her sister Kourtney, who wore a clinging leather dress as
they promoted their reality show Kourtney And Kim Take Miami. 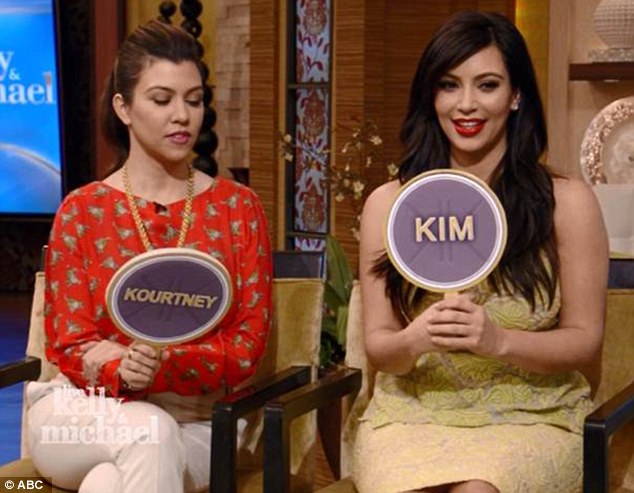 Just in case you didn’t know! The sisters hold up their names on placards

It was hard work for Kim, who tweeted: ‘Got 2.5 hours of sleep! I can never
sleep my 1st night in NYC. Off to do the Today Show soon, the Kelly
& Michael with @KourtneyKardash!’

After their early morning spot on the Today Show the sisters moved on to film Live With Kelly And Michael.

They switched their black outfits for
more colourful creations, with Kim choosing a yellow dress, teamed with
red lipstick, and Kourtney a red patterned blouse and white jeans.

She might be expecting, but Kim looked as on trend as ever
in her peplum dress with side cut outs and nude court shoes 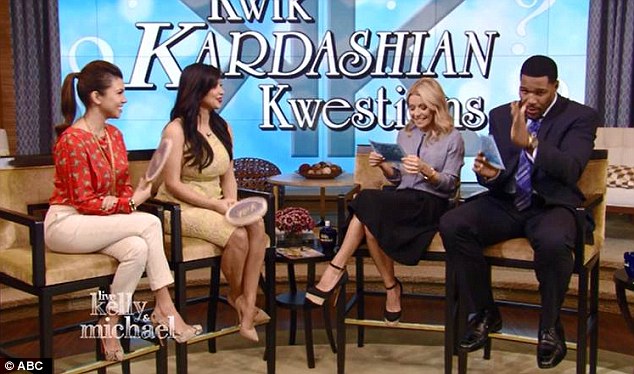