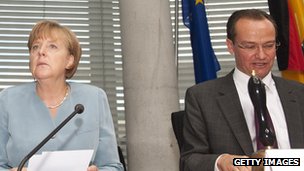 A new, strongly worded warning against Britain leaving the EU has come from a delegation of visiting German MPs.

It follows Wednesday’s expression of concern from a senior US official.

The cross-party delegation from the Bundestag’s EU Affairs committee was in London to highlight Germany’s growing alarm at the danger of a possible UK exit.

The chairman of the committee said if Britain left the EU, it would be disastrous for its economy.

The delegation is meeting British government officials and talking to MPs at the House of Commons.

Briefing reporters at the German Embassy in London, Gunther Krichbaum, a member of Chancellor Angela Merkel’s ruling CDU party, said: “Losing the single market for the UK would be an economic disaster.”

He added that more business leaders in Britain needed to make the case for continued membership.

Mr Krichbaum also argued that Britain would suffer a significant loss of global prestige if it left the EU club.

“Britain leaving [the EU] would weaken the European idea, but it would weaken Britain’s position in the world more,” he said.

“By the end of the 21st Century, Europe will account for only 4% of the global population,” he added. “We have to stand together.”

Following Wednesday’s public warning from the US Assistant Secretary of European Affairs, Philip Gordon, that the US wanted to see a continued strong UK voice within the EU, some members of the German delegation expressed the view that a British departure from the EU could damage relations with Washington for both London and Brussels.

Mr Krichbaum added that from his point of view, any attempt by Britain to renegotiate its position to reach a “new settlement” for continued membership would be resisted by its European partners.

“Renegotiating the Lisbon Treaty is first of all legally impossible,” he said.

“In the broader sense of negotiation a new treaty, it is neither wise nor useful to open a Pandora’s box.”

This would set a dangerous precedent and encourage other members states to try to renegotiate more favourable deals from their standpoints, Mr Krichbaum said.