By Daniel Eteghe
LAGOS — President Goodluck Jonathan, yesterday, said the Dana air plane crash was a major setback for the aviation industry at a time when the industry was undergoing a massive transformation to meet up with the global aviation standard.

Speaking at the scene of the plane crash in Iju area of Lagos State, Jonathan assured Nigerians that his administration would thoroughly investigate the accident to know the root cause of the air mishap. 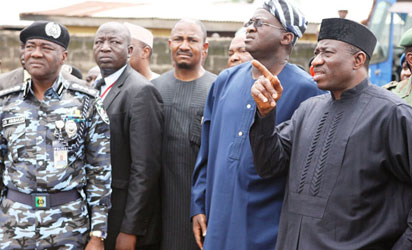 “It is a sad event for the whole country and all of us feel touched and that is why the Federal Government has declared three days of mourning. You will all agree with me that aviation business is an international business and all the laws that govern aviation are international. So as a nation, it is a very sad event, we have been working very hard to improve the aviation conditions in the country. For those of you who travel a lot, you have noticed some improvement going on in our airports. So the government is totally committed to improving the quality of the aviation in the country.

“Let me thank the government of Lagos State for what they have been doing since the crash yesterday because I have been in constant touch with the governor. Let me also thanked all the Federal Government agencies and other private sector operatives like Julius Berger and others who have been working with us voluntarily for this rescue operation.”

We ‘ll continue to struggle with this tragedy—Fashola

While expressing his gratitude to Jonathan, Governor Babatunde Fashola of Lagos State said: ”There is not enough for me to say as we will continue to struggle with this tragedy except to thank you for the concern and the support that you have provided since this incident happened since yesterday (Sunday) and on behalf of the government and people of Lagos State, we thank you again in spite of the fact that I briefed you this morning, you still took the pain to fly down here directly to come and commiserate with us, I thank you your Excellency very much.”

Also the Minister of Aviation, Princes Stella Oduah, while expressing her shock over the incident said: “Our hearts go to our brothers and to our sisters and to our children that lost their lives in this accident. Our hearts also go to the families of these victims that their lives were cut short because of this air mishap, we pray that this thing will not happen to us in this country again.”

Oduah commended the efforts of the evacuation team and said “nothing is enough, nothing will ever be enough because once life is gone you can’t do anything to get them back but I plead with Nigerians to be patience, people are working, we do not know what happened but we know that an air plane crashed and lives were lost and also we know that investigation is being conducted that sooner or later the reason for this incident will be made known to the public and I know.”

We must learn lessons from this incident—Uzordima

On his part, Senator Hope Uzordima, Chairman, Senate Committee on Aviation, said: “We are yet to recover from the shock of yesterday’s (Sunday) accident, one of the biggest tragedies that has happened in Nigeria in recent time and Mr. President in his wisdom invited all of us to come with him this afternoon to see things for ourselves, we have come, we have seen, we condole the government and people of Nigeria for this strong tragedy that has happened and we are sure that we must also learn lessons from this incident.”

Uzordima said “The government will be supported by the parliament, we are going to look into the immediate and the remote causes of this incident and see how best to strengthened the aviation sector in Nigeria and ensure that there will be no repeat occurrences. I want to implore all of us to take heart and continue to pray to Almighty God who is the author of everything in life, I am sure that we will get through this.”