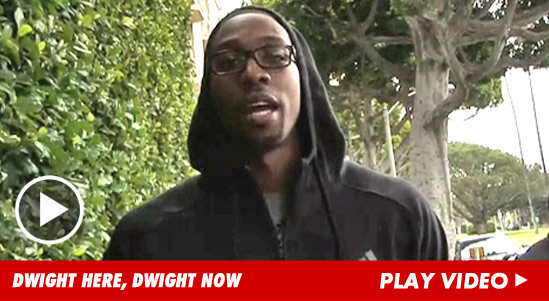 Orlando Magic superstar Dwight Howard tells TMZ … he’s been in constant contact with head coach Stan Van Gundy since his back surgery … saying they’ve spoken “a bunch of times” since the playoffs began.

Dwight was on a walk in Beverly Hills today … when we asked how life has been since he underwent back surgery in L.A. for a herniated disk last month.

“Sad” … Howard said … adding, “Just a little sad that I can’t be in Orlando with my teammates in the playoffs.”

“I feel like I’m in jail,” Dwight said … “I just really wish I could be there for my teammates.”

Dwight says he’s been watching every game and speaking with teammates since he’s been sidelined … “supporting them, telling them what they need to do.”

But then the bombshell — Dwight says he’s been talking with Coach Van Gundy “a bunch of times since the playoffs began” … shocking since Stan believes Dwight has been trying to get him fired from the head coaching job.

As for rumors that Dwight faked his injury … Dwight says it’s all B.S. — claiming the fragment that was floating in his back was the largest fragment his world famous surgeon has ever seen.