Yenagoa – The Joint Military Task Force (JTF) in Bayelsa has confirmed that two explosions rocked parts of Yenagoa at about midnight on Friday.

The JTF spokesman, Lt.-Col. Timothy Antigha, said on Saturday that there were dynamite explosions in certain parts of the capital city, but there were no casualties. 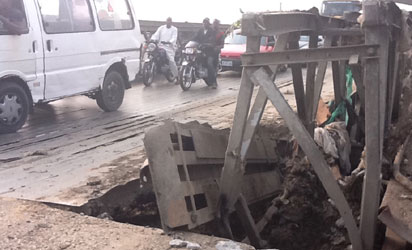 The task force, he said, was collaborating with other security agencies in the ongoing investigation into the matter.

Antigha advised the residents of Yenagoa to remain calm and pursue their legitimate businesses lawfully, “as the JTF is working in tandem with other security agencies to forestall a recurrence”.

The Commissioner of Police in the state, Mr Hilary Opara, also confirmed the blasts, saying that some miscreants might be trying to create the impression that there was insecurity in Bayelsa because Vice-President Namadi Sambo was expected in Bayelsa on Monday.

One of the scenes of the explosions is a colonial bridge constructed by the Shell Petroleum Development Company at the Tombia roundabout area.

The dynamite planted on the bridge exploded, creating a crater on one side of it.

Residents said that the aim of the masterminds of the blast had been defeated if it was intended to cut off the bridge.

This morning, anti-riot policemen and soldiers were seen taking charge.

Also at the scene of the other blast opposite the Government House gate, a Toyota Corolla car with registration number AH 674 KMK, laden with explosives suspected to be dynamites, exploded and got burnt but did not record any fatalities.

Reacting to the explosions, the Press Secretary to the Governor, Mr Doifie Ola, said “Gov. Timipre Sylva has just been informed of two explosions that rocked parts of Yenagoa, the Bayelsa State capital, late Friday night.

“Details of the incident are still sketchy, but the Government of Bayelsa State condemns in the strongest possible terms any attempt to return the state to the dark days of insecurity.

“The administration places high premium on peace and security, and has invested so much to attain the peace and quiet that currently pervade the state.

“If there is anything that both friends and foes of the current administration agree on, it is the clear fact that Bayelsa State has since the inception of the Sylva-led government emerged from the darkness of insecurity into the marvelous light of peace and stability.

“It will be most callous of anyone to try to shatter this peace.”

The spokesman quoted the governor as advising the peaceful people of Yenagoa “to remain calm, but strong and vigilant as we work together to overcome these challenges”. (NAN)