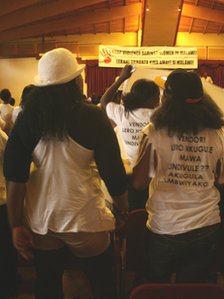 Women cheered as politicians and activists addressed the crowd

Some 3,000 people have gathered in Blantyre in Malawi to protest about attacks on women for wearing trousers.

Some female vendors were this week beaten and stripped on the streets of the capital, Lilongwe, and Blantyre for not wearing traditional dress.

A demonstration organiser told the BBC she urged women to turn up in trousers and white tops to show their outrage.

President Bingu wa Mutharika has said on national radio that women had the right to wear what they want.

He denied reports that he had ordered women to stop wearing trousers.

Until 1994, women in the deeply conservative southern African country were banned from wearing trousers or mini-skirts under the autocratic rule of Hastings Banda.

Men were also banned from having long hair.

Women have also been attacked for wearing trousers in Kenya, South Africa and Zimbabwe in recent years.

Seodi White, a lawyer and leading women’s rights activist and protest organiser, said the women were not dressing indecently.

“Yes Malawi is a reasonably conservative country. But we have been dressing up in any way we want, to the best level of our own decency, which is standard for everyone around the world, for 18 years. And nobody can stand up and say this is un-Malawian,” she told the BBC’s Network Africa programme.

She said women were being targeted by disaffected youth unhappy with the economic situation.

“The vendors that you see on the street are not old men. These are youngsters, young enough to be my sons.

“Is this really about culture or something else in terms of economic hardship people are looking for an outlet to vent on?”

Earlier, Mrs Banda also blamed the attacks on economic woes in Malawi, where there are severe shortages of fuel and foreign currency at present.

“There is so much suffering that people have decided to vent their frustrations on each other,” the vice-president said.

Last year, the UK and other donors cut aid to Malawi, amid criticism of its economic policies and its attitude to the opposition and journalists.

President Mutharika on Thursday made a nationwide broadcast, calling for an end to the attacks.

“I will not allow anyone to… go on the streets and start undressing women and girls wearing trousers, because that is illegal,” he said.

“You are free to wear what you want. Women who want to wear trousers should do so, as you will be protected from thugs, vendors and terrorists.”