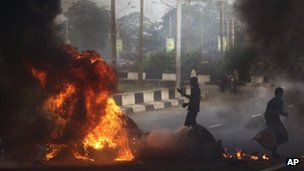 Roadblocks have been set alight in Nigeria’s main city of Lagos on the second day of an indefinite strike over the elimination of a fuel subsidy.

Correspondents say the city is tense after a protester was killed in Lagos on Monday in a demonstration over the doubling of petrol prices.

Unions in the northern city of Kano have cancelled protests after five people died.

Most businesses remain closed across the country, including the capital.

A demonstration organised by Nigeria’s unions is about to get under way in the capital, Abuja, where shops, offices, schools and petrol stations are shut.

According to the AFP news agency, police have fired tear gas at protesters in Bauchi, a city in the north. No casualties have been reported.

The BBC’s Mark Lobel in Lagos says the value of transactions on the Nigerian stock exchange was down to a fifth of its value on Monday, though oil firms say oil exports were unaffected.

Police pleaded for calm with some protesters who had manned a burning roadblock in Lagos, but instead they threw stones as the officers put out the flames, AP news agency reports.

Thousands of people taking part in the official march in Lagos walked through the streets to the sound of blaring Afrobeat music, sometimes with soldiers clapping and taking pictures, according to AFP.

Some carried a mock coffin labelled “Badluck”, AFP says – a play on the name of President Goodluck Jonathan, who has said the fuel subsidy was economically unsustainable.

In Kano, a dusk-to-dawn curfew was imposed after Monday’s fatalities when police clashed with protesters.

Union officials said there would be no further demonstrations in the city, but the strike action would continue, the BBC’s Yusuf Ibrahim Yakasai reports.

Fuel and transport costs doubled after the subsidy ended on 1 January, angering many Nigerians, who saw it as the only benefit they received from the country’s vast oil wealth.

Despite being a major oil producer, Nigeria has not invested in the infrastructure needed to produce refined fuel, so has to import much of its petrol.

With the subsidy, fuel was much cheaper in Nigeria than neighbouring countries, so some of it was smuggled abroad.

Members of parliament have called on President Jonathan to reconsider, but he made a televised address on Saturday to defend the the subsidy cut.

The deregulation of the petroleum sector was, he insisted, the best way to curb corruption and ensure the survival and growth of the economy.

He said that top government officials would, from this year, take a 25% pay cut, and foreign trips would also be reduced.

The government says it will spend the $8bn (£5bn) it saves each year by scrapping the subsidy on improving health, education and the country’s erratic electricity supply.

The unrest comes at the same time as a surge in sectarian violence. The Islamist militant group Boko Haram has carried out a string of deadly attacks in recent weeks, mainly against Christian targets in the north-east.

Despite its vast resources, Nigeria ranks among the most unequal countries in the world, according to the UN. The poverty in the north is in stark contrast to the more developed southern states. While in the oil-rich south-east, the residents of Delta and Akwa Ibom complain that all the wealth they generate flows up the pipeline to Abuja and Lagos.

Nigeria’s 160 million people are divided between numerous ethno-linguistic groups and also along religious lines. Broadly, the Hausa-Fulani people based in the north are mostly Muslims. The Yorubas of the south-west are divided between Muslims and Christians, while the Igbos of the south-east and neighbouring groups are mostly Christian or animist. The Middle Belt is home to hundreds of groups with different beliefs, and around Jos there are frequent clashes between Hausa-speaking Muslims and Christian members of the Berom community.

Southern residents tend to have better access to healthcare, as reflected by the greater uptake of vaccines for polio, tuberculosis, tetanus and diphtheria. Some northern groups have in the past boycotted immunisation programmes, saying they are a Western plot to make Muslim women infertile. This led to a recurrence of polio, but the vaccinations have now resumed.

Female literacy is seen as the key to raising living standards for the next generation. For example, a newborn child is far likelier to survive if its mother is well-educated. In Nigeria we see a stark contrast between the mainly Muslim north and the Christian and animist south. In some northern states less than 5% of women can read and write, whereas in some Igbo areas more than 90% are literate.

Nigeria is Africa’s biggest oil producer and among the biggest in the world but most of its people subsist on less than $2 a day. The oil is produced in the south-east and some militant groups there want to keep a greater share of the wealth which comes from under their feet. Attacks by militants on oil installations led to a sharp fall in Nigeria’s output during the last decade. But in 2010, a government amnesty led thousands of fighters to lay down their weapons.