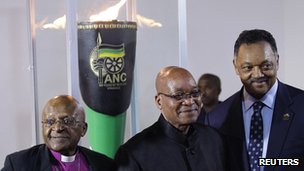 A centenary flame, lit at midnight by Jacob Zuma, will be taken to the rally

Tens of thousands of South Africans are gathering in the city of Bloemfontein to mark the 100th anniversary of the African National Congress.

They will attend a celebratory rally, which will be addressed by ANC leader and South African President Jacob Zuma.

Earlier, prayers were held at the Methodist church near Bloemfontein, where the ANC was formed to fight white minority rule.

Frail health has prevented Nelson Mandela from attending the events.

The 93 year old, who led the party to power after the end of apartheid, has not attended any public engagements since the start of the 2010 World Cup.

African and world leaders, as well as Archbishop Desmond Tutu and African-American civil rights activist Jesse Jackson, are also in Bloemfontein for the celebrations.

They attended a gala dinner on Saturday night, and an interfaith service on Sunday at the Wesleyan Church in Mangaung, just outside Bloemfontein, where chiefs, church leaders and other prominent people gathered on 8 January 1912 to create the liberation movement.

A torch carrying the centenary flame, lit by Mr Zuma at midnight, was housed in a glass case at the front of the church.

The flame will be brought to the stadium for the rally at Bloemfontein’s Free State stadium.

Mr Zuma began Saturday’s celebrations by leading the ritual slaughter of a black bull to remember, he said, “our ancestors, to remember our own gods in a traditional way”.

The BBC’s Nomsa Maseko in Bloemfontein said on Friday that the normally sleepy town was wide awake, with the gold, green and black colours of the ANC flags on virtually every street corner.

The weekend of events began on Friday with a golf tournament. Andrew Mlangeni, who joined the party in 1951 and spent years in prison on Robben Island with Mr Mandela, took the opening shot.

The tournament was criticised by commentators as a sign of the ruling party’s growing elitism – accusations dismissed by ANC spokesman Jackson Mthembu who said the party embraced “all sporting codes”.

The opposition has also criticised the amount of money being spent on the year-long ANC centenary celebrations – a total of $12m (£8m).

While the ANC is hailed as Africa’s oldest and most famous liberation movement, its reputation is being tarnished by corruption scandals, political infighting and reports of officials leading flashy lifestyles – and many South Africans believe the party has not done enough to improve the lives of the poor.

How are you taking part in the celebrations? Are you a member of the ANC party? Please share your experiences using the form below.