It’s difficult to imagine a better way to blitz away the remains of a New Year hangover than with an exhilarating ride on jet skis in Miami.

But a tender kiss with your beloved in the ocean might be one.

Lucky Tom Felton and his stunning girlfriend Jade Olivia enjoyed both as they welcomed the New Year together on the beach.

Tender moment: Tom Felton and his girlfriend Jade Olivia shared a loving kiss in the water while spending New Year’s Day on a Miami beach 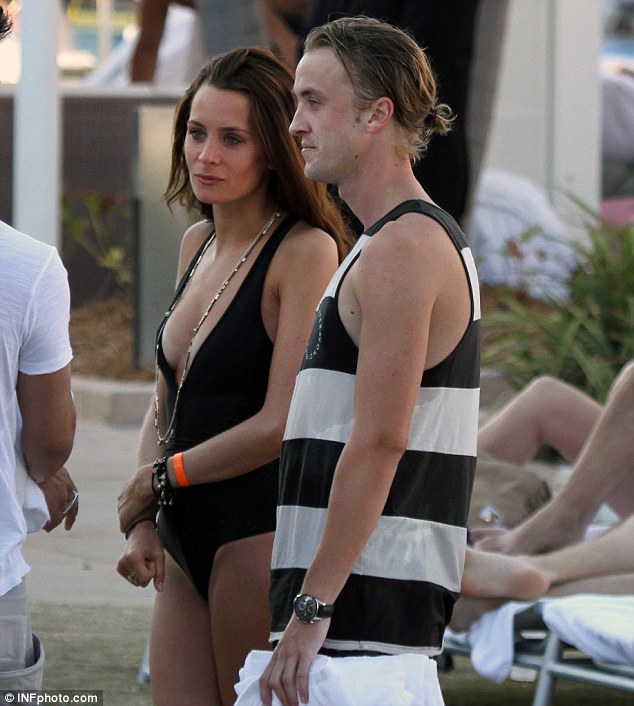 Skimpy: Jade was wearing a very revealing swimsuit in order to ensure a good tan

Tom looked completely besotted with his sweetheart as he moved towards her in the water.

The young couple spent their day on the glorious beach- with Jade showing off her
deepening tan and enviable figure in an extremely low cut black
swimming costume.

Tom conscientiously made absolutely sure that Jade’s life jacket was securely fastened before they set off on their wave riders. 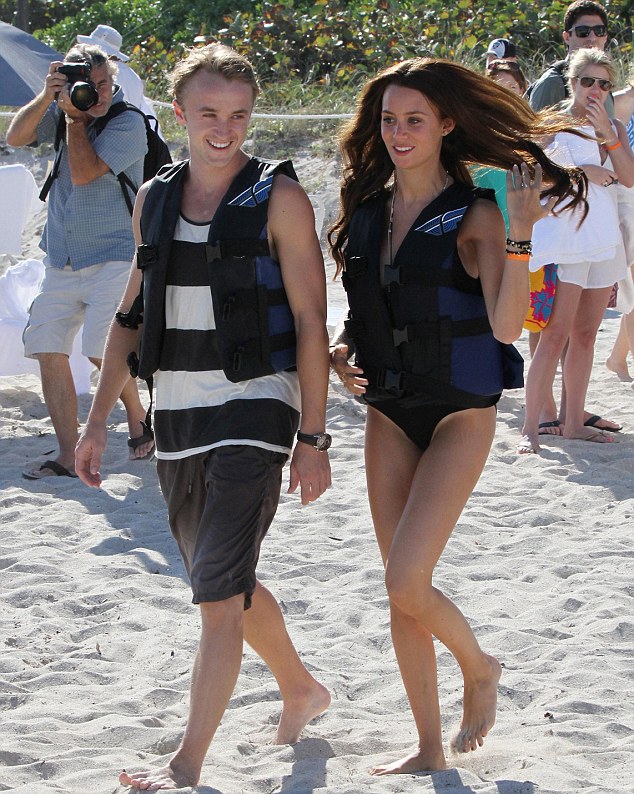 Showing her off! Tom wore a wide grin as he walked across the beach with Jade

Joined at the hip: Conscientious Tom made absolutely sure that Jade’s life jacket was securely fastened

Though Jade took an early lead, Tom soon sped ahead, looking rather pleased with himself as he did so.

After drying off in the sun, Tom obligingly posed for a photo with a young fan.

It appears that though he has gained a
fraction more colour than he had previously, unlike his girlfriend Jade
Olivia Tom is just not picking up the sun as he might wish. 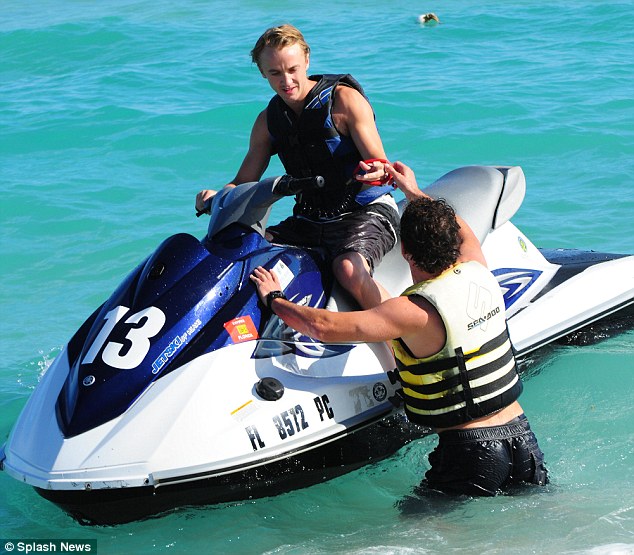 Safety first: Their instructor showed Tom his emergency armband to stop the ski in an emergency 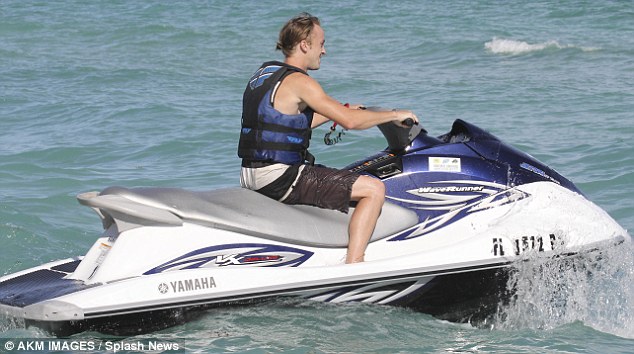 Race you! Tom looked as though he was gearing up for a little competition

Tom was famously forbidden from getting a tan during his tenure on Harry Potter, to maintain his authentic Draco Malfoy pallor.

The 24-year-old looked his usual pale self, while Jade is browning up nicely with a gorgeous caramel tan.

They
have been dating for over three years after meeting on the set of Harry
Potter, where Jade worked as a stunt co-ordinator assistant. 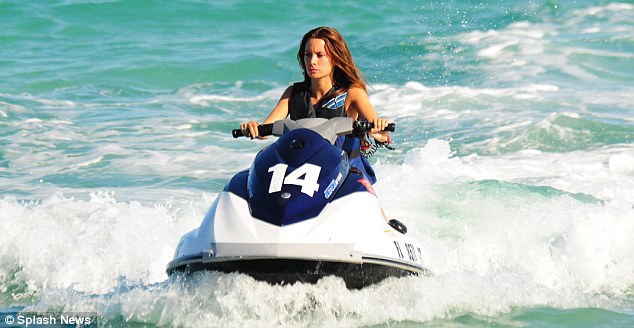 … but it appeared that confident Jade was the one speeding ahead 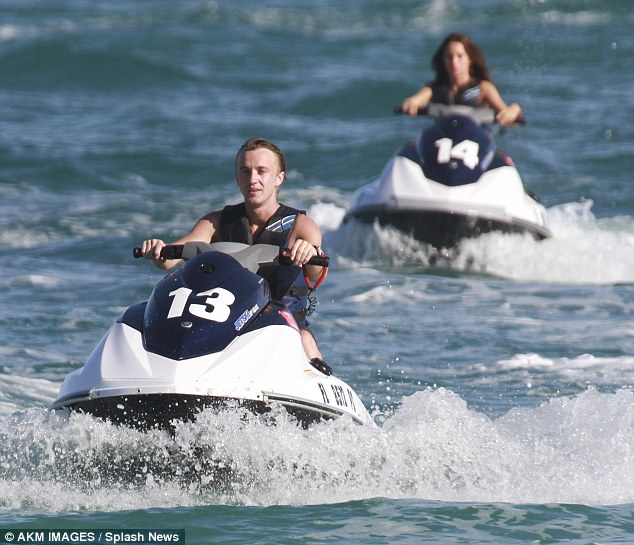 Overtake! Tom looked very pleased indeed to be getting ahead of his girlfriend 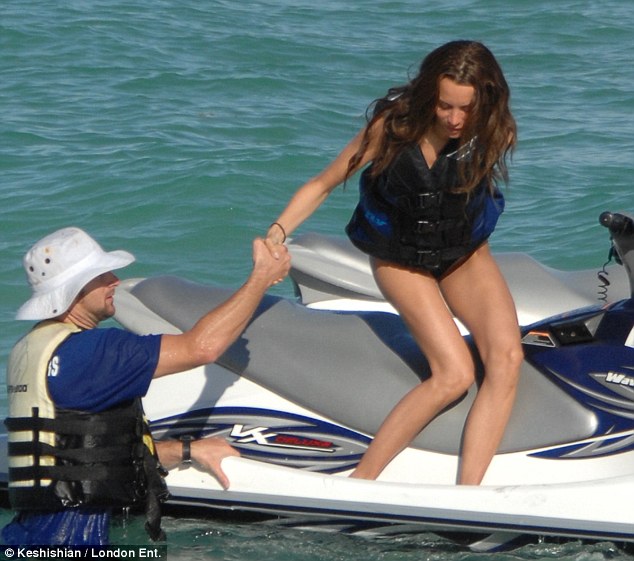 Easy does it! Jade had a helping hand as she made her way off the jet ski

The star tweeted a picture of himself in character from his upcoming project, Labyrinth.

He captioned the shot: ‘Happy New Year from all the team from #Labyrinth who kindly let me tweet a new exclusive pic of Trencavel x’

Tom is starring as as Raymond-Roger de Trencavel, Viscount of Carcassonne, in the upcoming mini-series. 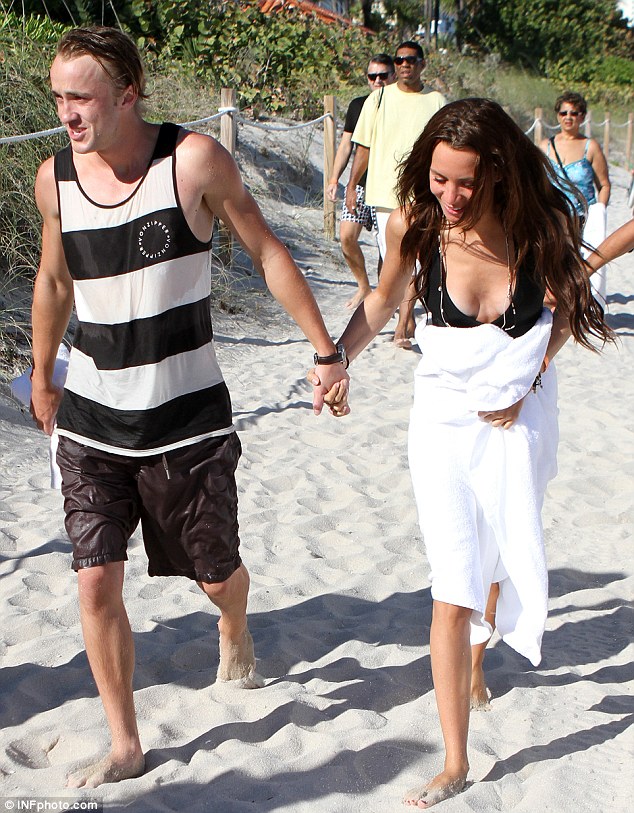 How low can you go! Jade’s swimming costume was very daring indeed

Drying off: Tom seemed happy to let the sun do most of the work, while Jade looked as though she’d caught some spray in her eye

The real Viscount of Carcassonne died in 1209 a martyr, trying to protect his Cathar citizens from genocide.

Tom has clearly been enjoying his time on set, and posed over the weekend: ‘tweeted a ‘Miss all the friends i made on labyrinth in Cape Town …especially Poncho (my faithful horse) x’ 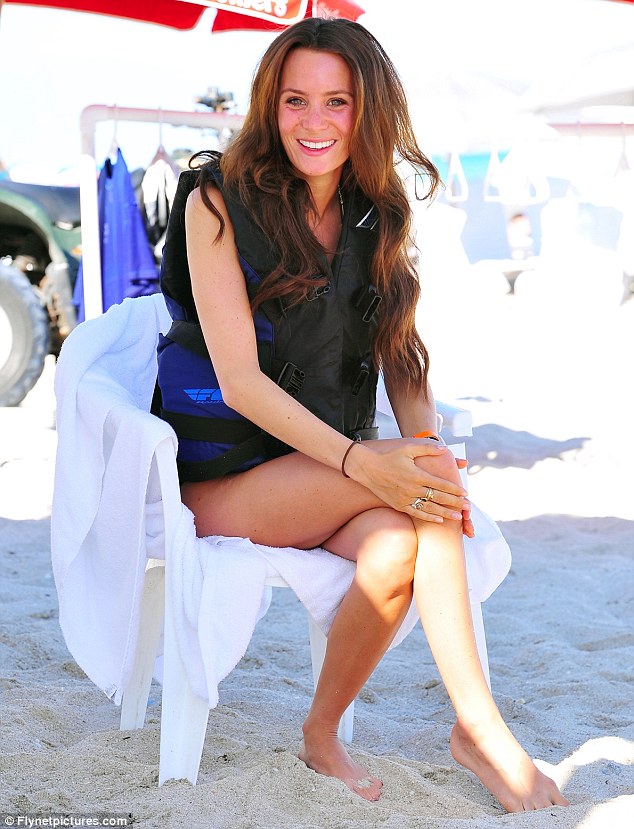 No wonder she’s smiling! Even shy Jade couldn’t keep the grin off her face as she enjoyed her gorgeous surroundings 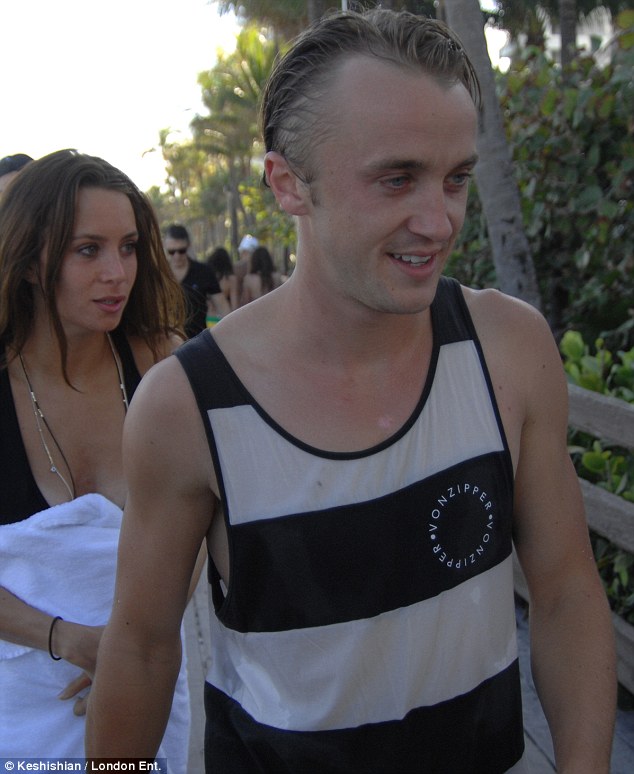 High spirits: Though looking a little weary after his New Year celebrations, Tom certainly seems to be relishing his beach break 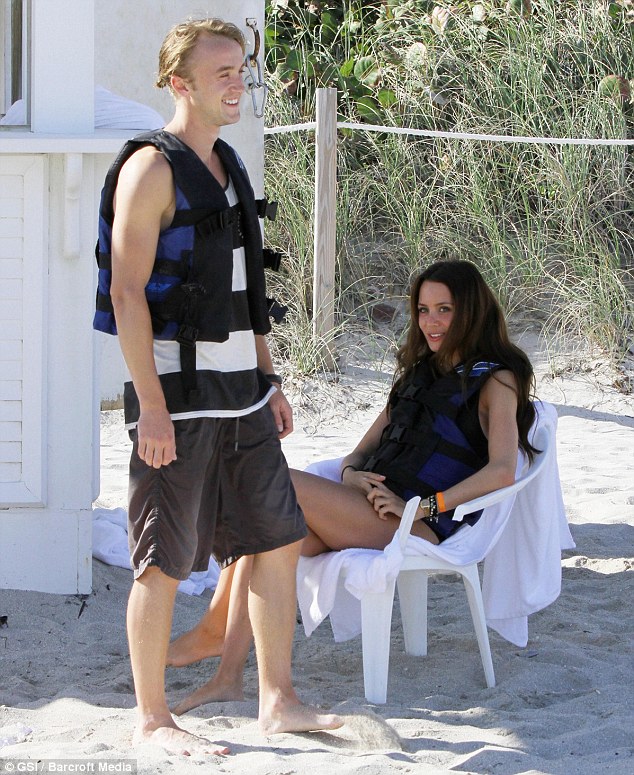 I’m not moving! While Tom still looked full of energy, it was clear that Jade needed a moment to relax 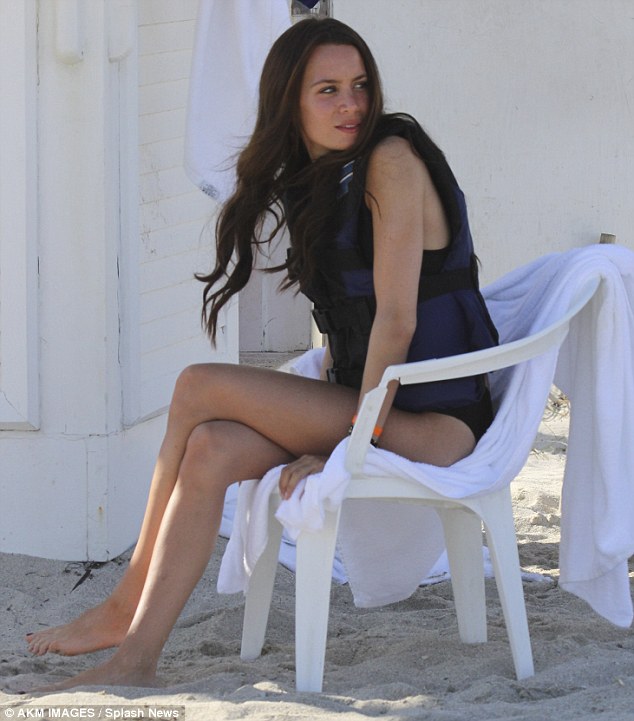 The series is expected to premiere in 2012.

Tom is also looking to distance himself from his evil character by starring in the sports drama From the Rough.

It
is based on the true story of Catana Starks, a former swim coach at
Tennesse State University, who became the first woman ever to coach a
college mens’ golf team. 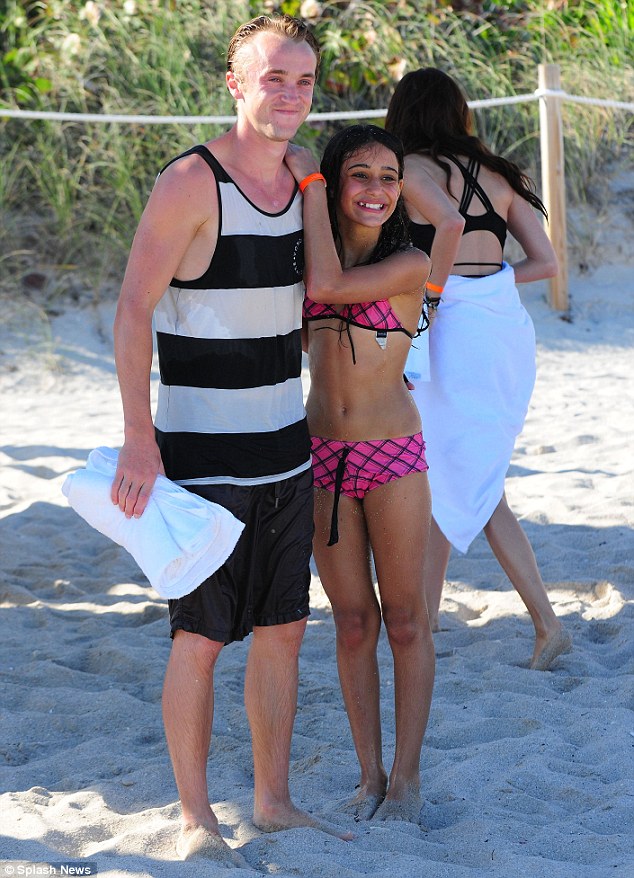 Happy to oblige: Good-humoured Tom posed for a picture with a young fan 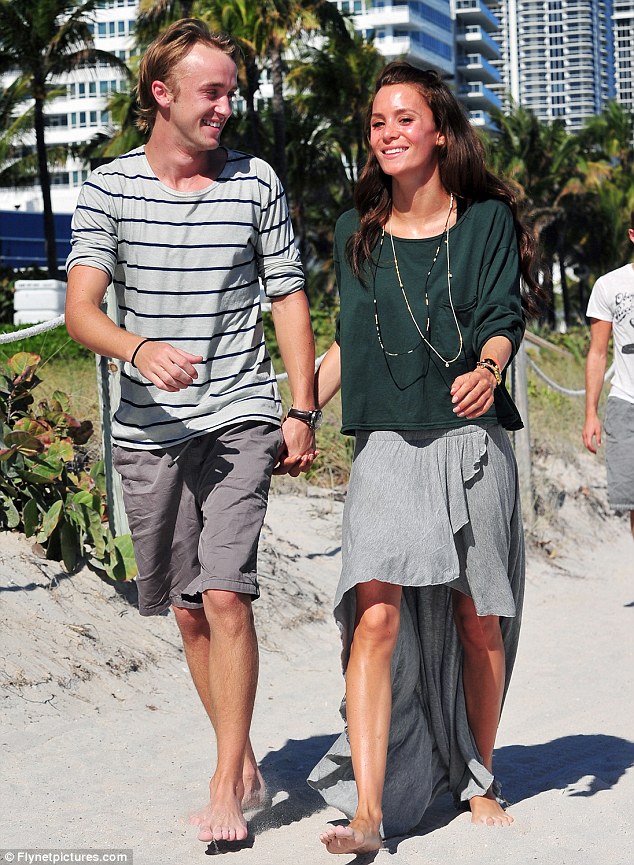 Laid-back style: The pair certainly knew how to work the barefoot beach look

Tom plays the character of Edward, a budding golfer from England.

The movie is due for release in February.

Tom was recently also announced as a celebrity guests at the Emerald City Comic-Con on March 30 and April 1. 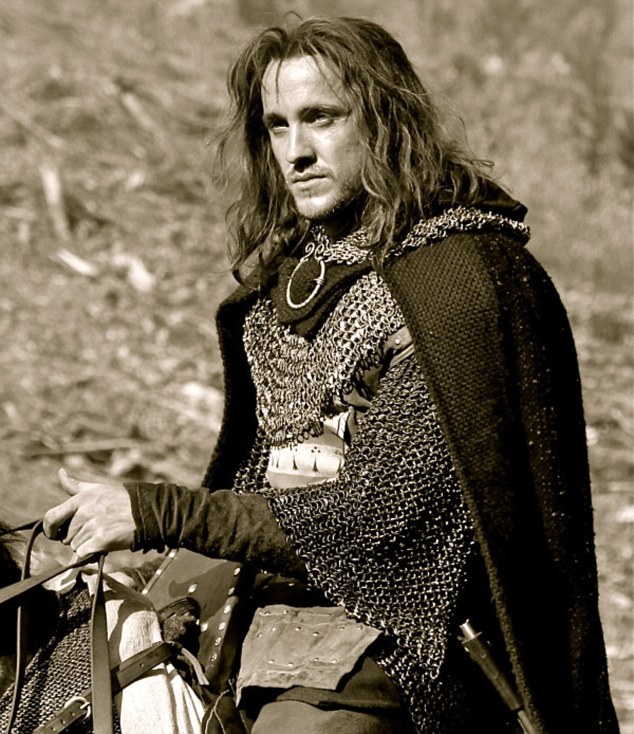 Barely recognisible: Tom tweeted this picture of himself in costume from the set of his latest project, Labyrinth

Read More:
Tom Felton and his gorgeous girlfriend share a tender New Year kiss in the sea during romantic holiday