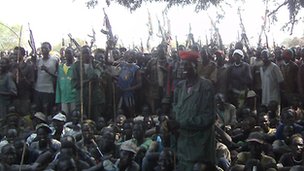 Medical charity MSF says it is “extremely worried” after losing contact with some 130 staff in the town of Pibor in South Sudan.

An MSF spokesman said he believed they had fled into the bush after fighters from the Lou Nuer ethnic group attacked the town, home to the Murle group.

A hospital was reportedly set alight.

UN troops and the South Sudanese army were unable to prevent the attack, which follows a wave of violence linked to cattle rustling.

MSF spokesman Parthesarathy Rajendran told the BBC they had only been able to get in touch with 13 members of staff, and believe the rest fled into the bush to escape the attack.

He urged both sides in the conflict to respect MSF facilities because the charity was the only health-care provider in the area.

Almost all the residents of Pibor had also already fled amid fears of an impending assault.

The UN had deployed more combat troops to defend the town following reports that the armed Lou Nuer men were approaching.

However, the 800 soldiers who were said to be present in the Pibor were completely outnumbered by the attackers.

The number of casualties is not yet known.

Six thousand fighters from the Lou Nuer ethnic group have been marching through Jonglei state in recent weeks setting fire to homes and seizing livestock.

About 1,000 people have been killed in Jonglei in recent months, during inter-ethnic fighting, triggered by the cattle raids.

The BBC East Africa Correspondent, Will Ross, says the Lou Nuer and Murle communities are now basically at war with each other.

It is not clear what can be done to ensure that there is not massive loss of life, he says.

Tribal violence over cattle rustling has been going on for years in the region, but reprisal attacks are now at an alarming level, our correspondent adds.

These are now being used in tribal power-struggles, which often focus on cattle because of the central role they play in many South Sudanese communities.

So far, the South Sudanese authorities appear unable to make any progress in tackling the problem.