By Steve Bower
BBC Match of the Day commentator 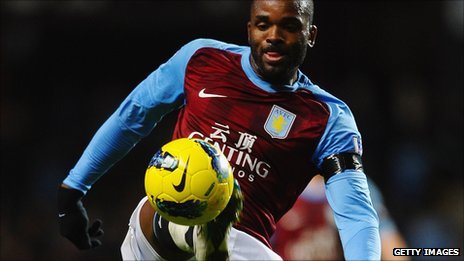 Aston Villa will assess captain Stiliyan Petrov, who limped off in Saturday’s 3-1 win away to Chelsea.

Darren Bent may start after scoring on his return from injury as a substitute at Stamford Bridge, while the fit-again Emile Heskey may be on the bench.

Swansea boss Brendan Rodgers is likely to freshen up his side, with Danny Graham and Leon Britton set to start.

On-loan defender Steven Caulker will return, having been ineligible to face parent club Tottenham on Saturday.

These two clubs begin a new calendar year leaving behind very different emotions from the last one. While Swansea try to build on what Brendan Rodgers has described as an “iconic” 12 months, Aston Villa’s aim has to be some stability and consistency. For Villa, 2011 was certainly a rollercoaster year that saw messrs Houllier, McAllister and McLeish all in charge of the team, a flirtation with relegation and a club record outlay of £24m on Darren Bent.

That kind of spending won’t be repeated this January but the challenge is for them to show the resilience and determination that was so clearly evident in their victory at Chelsea on a more regular basis.

That result will have been a timely reminder of what they can achieve. The enigmatic Stephen Ireland played a key role against the Blues – if Villa can get the Irishman performing anywhere near the level he reached at Manchester City under Mark Hughes, it will feel like a new signing, and a talented one too.

Villa have lost four of their last five home games but a match against the side with the worst away record in the league gives Alex McLeish’s team an opportunity to start a better run of results. Villa’s home form was always the foundation of the top-six finishes achieved under Martin O’Neill.

When Swansea were beating Reading in the Championship to begin 2011, who would have thought that 12 months on they would have 20 points on the board at the halfway stage in the Premier League, having just drawn with Tottenham? It’s been a remarkable journey that is still gathering pace and Brendan Rogers’ team have won many admirers as well as points with their brand of football. Their defensive foundation has been impressive too, with eight clean sheets on the board.

The one area that will be a concern that could yet jeopardise the fairytale is their away form. They are the only team yet to win away in the top flight, having managed just three points and six goals on their travels, and that is adding extra pressure to their performances at the Liberty Stadium. Three points at Villa Park would be their perfect start to the new year.