By
Natalie Trombetta and Alanah Eriksen

Russell Brand has filed for divorce from Katy Perry after 14 months of marriage.

The 36-year-old comedian said in a statement today: ‘Sadly, Katy and I are ending our marriage. I’ll always adore her and I know we’ll remain friends.’

The Arthur star was spotted in London today without his wedding ring for the second day in a row. 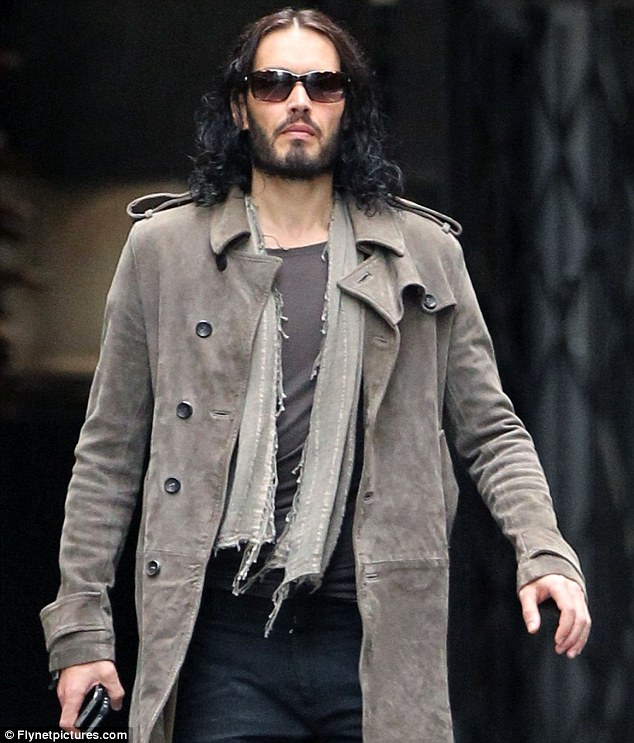 It’s over: Russell Brand, pictured today in London without his wedding ring, has filed for divorce from his wife Katy Perry

‘Irreconcilable differences’: The 36-year-old visited a friend in North London while his legal team filed court documents in Los Angeles

The divorce documents, which refer to
Perry by her give name Katheryn Elizabeth Hudson, show there are
‘community property assets,’ suggesting there may not be a pre-nuptial
agreement in place.

Perry is yet to comment on the split and there is some speculation she was blind-sided by Brand’s official move to end their marriage.

The pair sparked rumours of trouble
after celebrating Christmas 7,000 miles apart – he spent the festive day
in Cornwall while the Teenage Dream singer, 27, was with friends in
Hawaii.

Signs of trouble: Katy Perry spent Christmas in Hawaii while her husband was 7,000 miles away in Cornwall 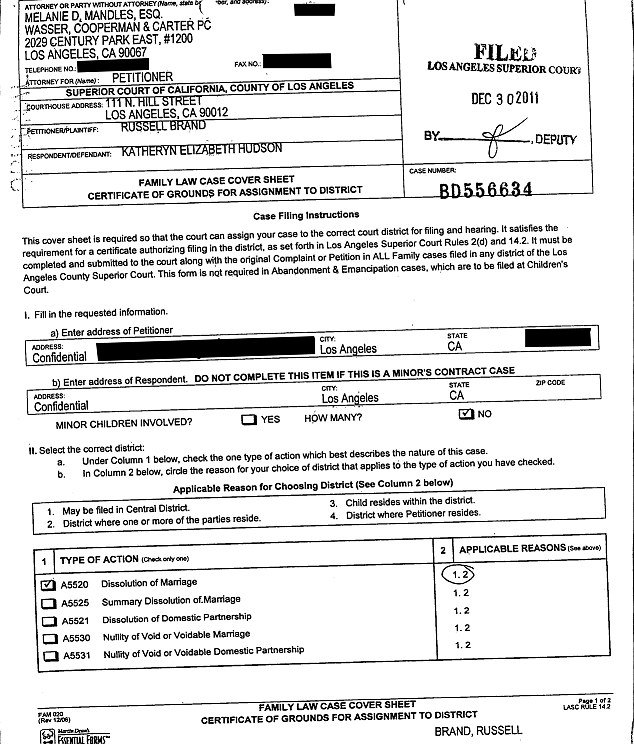 Official: The legal document refers to the singer by her given name, Katheryn Elizabeth Hudson

Perry was not wearing her wedding ring either when she was photographed frolicking in the surf on December 25.

Last public appearance: The pair attended a benefit for the David Lynch Foundation in Los Angeles on December 3

He told Ellen DeGeneres on December 2: ‘I’m really happily
married. I’m married to Katy. Perpetually, until death do us part was
the pledge. I’m still alive.’

In November, Perry told the same TV host that that she ‘would love to have children’ with Brand.

She
said: ‘I think that’s one of the reasons you get married, especially to
the person that you marry. You think: “That person is going to be a
good partner, a good parent.”’

Asked if she wanted a big family, Perry added: ‘If it doesn’t hurt the first time I’ll keep popping them out.’

But there was clearly trouble brewing when the pair decided to spend Christmas apart, allegedly after a huge row.

A source was quoted as telling Us Weekly magazine: ‘They had a massive fight. She was like, “F*** you.
I’m going to do my own thing.”

Meanwhile the insider said that Russell replied: ‘Fine, f*** you too.’

The
couple had planned Christmas together and Perry was expected to jet her family in a private plane over to the UK to
celebrate.

In November, Brand’s mother Barbara
had tweeted she was looking forward to spending the festive season with
her son and daughter-in-law.

She wrote on Twitter: ‘Spoke to Russell and Katy, they are so happy, it’s lovely. We will all be together for Christmas.’

The California-born star began dating
the British comedian in 2009 after she famously threw a bottle at his
head at an MTV Music Awards party.

He proposed just four months later on New Year’s Eve and they were married in October last year. 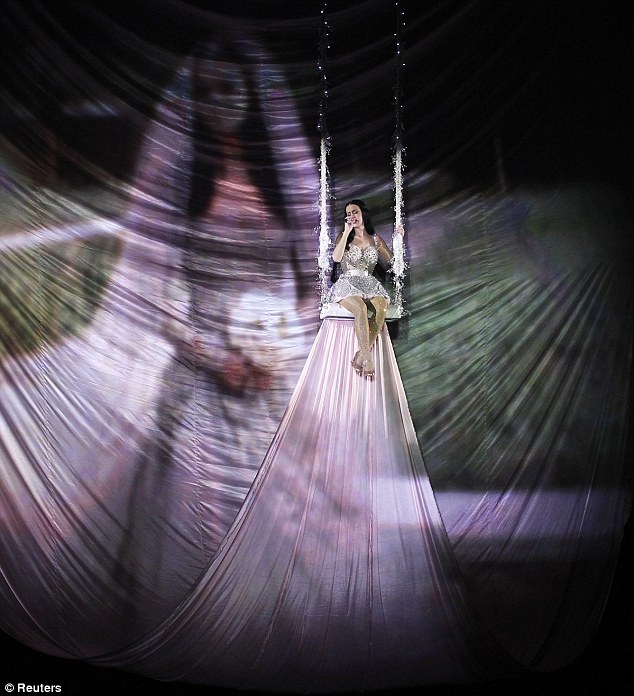 Lavish wedding: Katy flashed up pictures from her big day while performing Not Like The Movies at the Grammy Awards in Los Angeles in February

Their lavish ceremony at a five-star resort in India included two elephants, acrobats and jugglers.

Brand was once notorious in England as a hard-partying bachelor and self-confessed sex addict.

He later had a spiritual awakening and got sober after years of heroin and alcohol abuse.

He insisted he’d reformed his wild ways before settling down with Perry.

‘I think I was ready for it,’ he
said. ‘If you’re wild, like a wild animal, marriage won’t contain you. I
think that’s how a lot of people get into trouble.’

Brand will next appear in the Eighties musical film, Rock Of Ages, alongside Tom Cruise.

Perry, who has spent much of the year on tour, recently released the new single The One That Got Away.

The track is currently number three on the US charts. If it reaches number one, it will be her sixth chart-topping single from her Teenage Dream album, surpassing the record set by Michael Jackson’s Bad.

THE HIGHS AND LOWS OF KATY AND RUSSELL’S ROMANCE 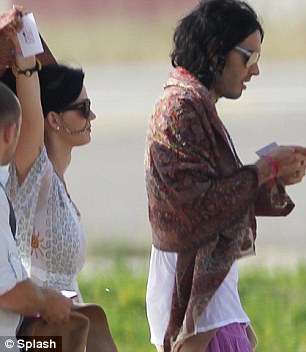 Just married: Katy Perry and Russell Brand days after their lavish wedding in India in October 2009

Summer 2008: The couple are first introduced when Perry films a cameo appearance on Brand’s film, get Him to the Greek.

September 2009:
They begin dating after meeting again at the MTV Music Awards in LA.
Perry famously threw a bottle at the comedian’s head during rehearsals.
Brand joked on stage: ‘Katy Perry didn’t win an award and she’s staying
at the same hotel as me, so she’s gonna need a shoulder to cry on. So in
a way, I’m the real winner tonight.’ He took her on a date the next
day.

December 2009: Brand proposes to Perry near the Ranthambhore tiger sanctuary in Rajasthan, India.

June 2010:
They reveal their matching tattoos, a Sanskrit phrase, in honour of the
place they became engaged. The inking on the underside of their right
biceps, means ‘Go with the flow’. 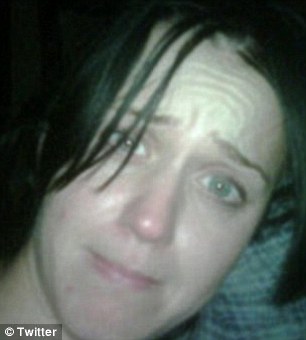 One way to annoy the missus! Brand posted a picture his bare-faced wife on Twitter. It was swiftly removed

September 2010:
In the second instalment of his autobiography, My Booky Wook 2, former
sex addict Brand says he fell in love with Perry the moment he met her. ‘I knew I’d marry her on that first date.,’ he wrote. ‘The truth is I
fell in love with her when she hit me with that bottle. From the first
date, I changed. No more women. Well, actually, thousands of women. I
wake up to a different one each day, they’re all her.  She chose me,
bottled me and cuffed me. And now this is my life, my girl, this
beautiful woman.’

October 2010: The couple get married in a traditional Hindu ceremony at the same spot Brand proposed.

December 2010: Brand tweets a rather unflattering picture of a make-up free Perry before swiftly removing it from the social networking site. 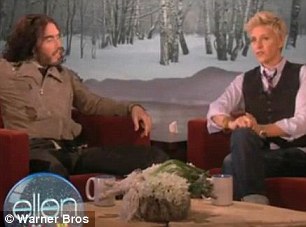 ‘Happily married’: The comedian told Ellen DeGeneres his marriage was in good shape on December 2

November 2011: Perry tells talkshow host Ellen DeGeneres that she would ‘love to have children’ with Brand.

December 2:
Brand tells Ellen DeGeneres: I am really happily married… I’m married
to Katy. Perpetually, until death do us part was the pledge.’ He adds
that he wants children with the singer. 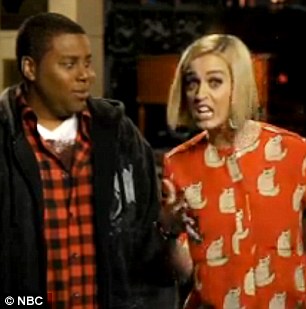 Mocking her man: Perry impersonates her husband during a sketch on Saturday Night Live on December 7

December 3, 2011: The couple are pictured together for the last time, at a benefit for the David Lynch Foundation in Los Angeles.

December 7, 2011:
Perry impersonates her husband during a sketch on Saturday Night Live,
mocking his accent when asked by show favourite Kenan Thompson if he had
given her any hosting tips. Speaking about the show, she told MTV: ‘I’m
up for a challenge, for something new. I love to be challenged … I
married Russell Brand.’

December 25, 2011:
Rumours the couple are divorcing start circulating after they spend
Christmas 7,000 miles apart – Brand in Cornwall and Perry in Hawaii.

December 29: Brand is seen out in London, not wearing his wedding ring as he poses for photos with fans.

December 30, 2011: After another day out without his wedding ring, Brand announces he is divorcing Perry, citing ‘irreconcilable differences’.

DO THEY HAVE A PRE-UP? WHAT’S AT STAKE

In Brand’s divorce document, the star ticked the box for ‘Property rights to be determined,’ hinting that the pair may not have had a pre-nuptial agreement in place.

If they do, it does not cover all of the earnings and other assets they accumulated during their brief marriage.

The couple have at least three properties together – including a $6.5m Hollywood home they purchased in June.

They are also understood to own a $2.7m apartment in Manhattan’s trendy TriBeca as well as a residence in London.

Brand asks in the papers that ‘attorney fees and costs will be payable by each party to advance his/her own without prejudice.’

Martial home: The pair splashed out $6.5 million on this Hollywood mansion in June

Brand asks in the papers that ‘attorney fees and costs will be payable by each party to advance his/her own without prejudice.’