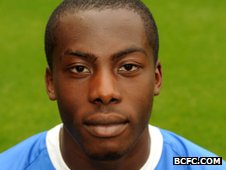 Asante has made one competitive appearance for Birmingham

Northampton will sign striker Akwasi Asante from Birmingham City on a one-month loan deal on 1 January.

Asante, 19, joined Blues aged 13 and progressed through the youth academy to make his debut in August’s Europa League tie against Nacional.

“Akwasi is a handful for defenders to play against. He’s young, hungry and has a lot of pace,” said Cobblers boss Aidy Boothroyd.

“He has a good goalscoring record in reserve team football.”

Boothroyd added: “I think he can do a good job for us.”

The Amsterdam-born striker is available for Northampton’s trip to Shrewsbury Town on Monday, 2 January.