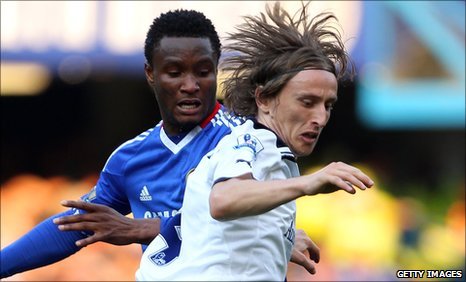 Chelsea will decide this week whether to make a renewed bid for Tottenham’s Croatian playmaker Luka Modric.

Chief executive Ron Gourlay will discuss whether to make a third bid for Modric – or abandon their plans to sign him – with new boss Andre Villas-Boas.

“I don’t like talking about players from other clubs, but that’s something we’ll look at in the week and take it from there,” he told Sky Sports News.

Modric is believed to have handed in an official transfer request.

Spurs have repeatedly insisted the midfielder is not for sale, though he is said to have accused chairman Daniel Levy of reneging on a gentleman’s agreement to allow him to leave.

“We really need to sit down with Andre and talk this through. Even though we’ve been travelling away on a pre-season tour in Asia, you can still be active in the marketplace nowadays,” added Gourlay. “The communication is always there with our guys back in London, or wherever they are at the present time around the world.”

Tottenham manager Harry Redknapp’s most recents comments on Modric, who captained Spurs on their pre-season tour in South Africa, were that it was down to Levy, and that he felt the player was worth much more than Chelsea had bid.

And when reports emerged in the middle of July speculating Modric had handed in a transfer request, Redknapp told BBC Sport’s chief football writer Phil McNulty it was ultimately irrelevant whether he had or not.

“We know he wants to leave, whether he writes it down on a piece of paper doesn’t really make any difference to our stance,” said the Spurs boss. “He’s a great player and we don’t want to lose him.”

As well as Modric, Chelsea have been heavily linked with Palermo playmaker Javier Pastore – who is reportedly on the brink of joining Paris St Germain – and Anderlecht striker Romelu Lukaku.

The west Londoners have also had a bid accepted for Barcelona midfielder Oriol Romeu, who could help fill the void left by the serious knee injury suffered by the influential Michael Essien.